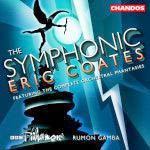 "This is easily the best Eric Coates collection ever. It is a joy to hear his imaginatively coloured orchestration on a full-sized orchestra with an ample string group and played with such loving warmth and finessse. (A) wonderfully enjoyable CD." (Penguin Guide)

Eric Coates is one of the most successful 'light music' composers of the twentieth century. His stirring March from the film The Dam Busters evokes the best of the British war-time spirit and is as well known as the marches of Elgar and Walton.

Whilst there are other recordings of Coates's music, few others can boast a top symphony orchestra recorded in state-of-the-art sound.

The program juxtaposes popular and less well-known works and is the first time all three of Coates's Phantasies have been featured on one disc.

REVIEWS
Rumon Gamba and the BBC Philharmonic are a respected partnership:

'In all this music, played with fervour and flair by the well-proven Rumon Gamba-BBC Philharmonic partnership, the vigour and vitality of the composer's musical invention shines through.'
Gramophone on CHAN 9896 (The Film Music of Sir Arthur Bliss)

2 The Selfish Giant 9:51
A Phantasy
Orchestrated by Sydney Baynes

3 The Three Bears 9:31
From the Fairy Story 'Goldilocks and the Three Bears'
A Phantasy for Orchestra
To Austin on His Fourth Birthday

Coates: The Music of (Incls the London Suite, The Dam Busters March & the Three Bears Phantasy)