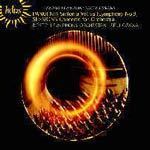 'Absolutely the finest orchestral recording ever heard in any format' (Fanfare, USA)

For many years, American Civil War veteran, amateur musician and philanthropist Major Henry Lee Higginson dreamed of founding a great and permanent orchestra in his home town of Boston, Massachusetts. His vision became reality in the spring of 1881 and on 22 October in that year the inaugural concert of the Boston Symphony Orchestra took place under the direction of Georg (later Sir George) Henschel. The succeeding century saw the Boston Symphony unerringly establish its present place among the supreme half dozen orchestras in the world. Major Higginson died in 1919 and one would be very hard put indeed to conceive of a more resplendent memorial to him.

After the departure of Monteux the orchestra entered twenty-five year of great glory under the leadership of Serge Koussevitsky. This period being that which saw great advances in gramophone recording, the reputation of the orchestra spread throughout the world by means of the many records made for RCA. Koussevitsky retired in 1949 and was succeeded by Charles Munch who also made many records with the orchestra, and then the office passed to Erich Leinsdorf (1962-1969) and William Steinberg (1969-1972). After 1972 the reputation of the orchestra reached new heights under Seiji Ozawa.

In its time the orchestra has also had many distinguished guest conductors, among them being Ansermet, Beecham, Bernstein, Boult, (Colin) Davis, Defauw, Goossens, Kostelanetz, Malko, Mitropoulos, Paray, Reiner, Szell, Walter and Wood. In addition, many composers have had the privilege of standing before it: Arbós, Bloch, Casella, Enescu, Glazunov, Holst, Honegger, Prokofiev, Ravel, Respighi, Stravinsky, Villa-Lobos.

Symphony Hall, the orchestra's present home and the venue in which this recording was made, was opened in 1900 and is widely regarded as one of the world's best concert halls.

In 1931, during Koussevitsky's tenure, the orchestra decided to celebrate its first half-century by commissioning works from a number of the leading composers of the day. It is now well known that the occasion produced a number of compositions of lasting worth, among them being Honegger's First, Roussel's Third, and Prokofiev's Fourth Symphonies, Hindemith's Concert Music, Op 50, and, perhaps the most celebrated, Stravinsky's Symphony of Psalms, 'composed for the glory of God and dedicated to the Boston Symphony Orchestra on the occasion of the 50th anniversary of its existence'.

For the auspicious occasion of its 100th birthday in 1981, the Boston Symphony decided once again to invite twelve composers to write something for them, with financial help from the Commonwealth of Massachusetts through the Massachusetts Council on the Arts and Humanities. Two of the resulting works are recorded here - the Concerto for Orchestra by Roger Sessions, and the Sinfonia Votiva of Andrzej Panufnik. Among the composers invited by the orchestra in addition to those represented on this recording were Sandor Balassa, Leonard Bernstein (Divertimento for Orchestra), John Corigliano (Promenade Overture, performed by the associated Boston 'Pops' Orchestra), John Harbison, Leon Kirchner, Peter Lieberson, Donald Martino, and Olly Wilson. Sir Michael's Tippett's oratorio The Mask of Time was performed in 1984. Also from Britain, and completed and performed in the centenary year, was the Second Symphony of Peter Maxwell Davies. (The orchestra also received an extra and unlooked-for additional piece from Mr Maxwell Davies; his birthday greeting to the orchestra took the form of a fanfare for five hundred trumpets and a thousand tamtams!).

The first performances of Sessions's Concerto for Orchestra took place in Symphony Hall on 23 and 24 October 1981. The first performance of Panufnik's Sinfonia Votiva was given on 28 January 1982. The work was repeated on the two following days, January 29 and 30, and it was before the last of these performances that this recording was made, in the presence of the composer.

Andrzej Panufnik
SINFONIA VOTIVA (SYMPHONY NO 8)
Andrzej Panufnik was born in Warsaw, PoIand, on September 24, 1914. His father was a distinguished maker of stringed instruments, and his mother, of English origin, was a violinist and composer. Music was part of the family life from the first, and young Andrzej began composing at the age of nine with a sonatina for piano. After five years of study at the State Conservatory in Warsaw, from which he graduated with distinction, he studied conducting with Felix Weingartner in Vienna. Later he pursued his studies further in Paris and London.

At the outbreak of World War II he returned to his native Warsaw and remained there throughout all of the extraordinary difficulties suffered by its inhabitants at the hands of the Nazis on the one hand and the Soviets on the other. In that atmosphere of violent opposing forces it was unsafe to attract the attention of either side, but under a pseudonym he wrote patriotic Polish songs and participated as a pianist in underground and charity concerts. The dIsastrous Warsaw uprising of 1944 was a personal catastrophe for Panufnik. His only brother, a member of the Polish Underground, died in the fighting, and the fires destroyed every note of his music composed up to that time. Later, Panufnik was able to reconstruct a few of those early compositions, among them a Tragic Overture which he dedicated to his brother's memory.

After the war Panufnik obtained prestigious positions as a conductor in Cracow and Warsaw and once again began composing. The growth of Communist control of the arts in post-war Poland found Panufnik in a highly equivocal position; his music was frequently chosen to represent Poland in performances abroad, but he was attacked at home as 'formalist' and 'alien to the great socialist era'. His Sinfonia Rustica, one of the major works of his Polish years, was inspired by native Polish art and based, in part, on fragments of folk themes. It would seem to be highly appropriate for a nationalistic composition. Indeed, the score was awarded First Prize in the 1949 Chopin Competition in Warsaw. But this was the time of the Stalinist crackdown on artists who were deemed to be insufficiently close to the party line, and in that same year the General Secretary of the Soviet Composers' Union decreed 'This work has ceased to exist'.

More and more unwilling to accept 'official' intervention in the creation of works of art, Panufnik finally left his homeland in July 1954. When he was ordered home after conducting a concert in Zürich, he went instead to England where he was granted political asylum and eventually became a naturalised British citizen. During his first years in England he conducted frequently and revised many of his earlier scores. For the last three decades of his life, before his death in 1991, he devoted himself almost totally to composition.

Panufnik's approach to composition was perhaps unique in his time, when composers agonized over systems and styles. Panufnik was never a devotee of any compositional 'system', and his music ranges widely in mood and character, yet there is never any doubt that it is the product of a contemporary sensibility. He admired the dictum of Alexander Pope (whose poetry he has set to music and who lived - two centuries before - near Panufnik's own home on the Thames): 'Order is Heav'n's first law'. Panufnik's music is always carefully controlled from the outset, even planned in strict geometrical terms. But the precompositional plan did not become a straitjacket to the imagination; rather it provided the framework within which the artist moved with complete freedom. By imposing limitations on himself he paradoxically created the necessary precondition for a freedom of invention that still had a perceptible unity. More and more, Panufnik's music grew from the most seemingly restricted musical ideas - often no more than a figure of three or four notes, employed exclusively but with the greatest variety of treatment to obtain an extraordinary range of textures and harmonies, from the sImplest to the most dense and complex. At the same tIme, his music seems always to have behind it an underlying 'impulse'. His works are not, at bottom, mere abstract patterns, however striking may be the structural basis. They were composed with an expressive goal in mind - and even a moral goal. His music responded to the ethical questions of our day.

Andrzej Panufnik knew from personal experience what humankind can do at its worst; and yet his music, which has at its core a basically religious viewpoint, combines the melodic and rhythmic gestures of his native Poland with formal systems that reflect the Catholic intellectual tradition of his background, and in so doing aims to express the highest aspirations and the deepest feelings that we can know.

The Sinfonia Votiva is scored for two flutes and piccolo, two oboes and cor anglais, two clarinets and bass clarinet, two bassoons and contrabassoon, four horns, three trumpets, three trombones, tuba, glockenspiel, vibraphone, tubular bells, three each of triangles, cymbals and tamtams in small, medium and large sizes, harp and strings. The composer strongly recommends doubling the harp part in the second movement with another placed on the opposite side of the platform. That arrangement was followed in this recording.