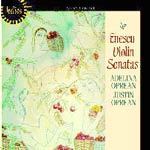 'Exemplary performance... An important release, much to be recommended' (CDReview)

THE ROMANIAN COMPOSER George Enescu (1881-1955) is one of the neglected giants of modern music. His magnificent series of late chamber works, which starts with his Third Violin Sonata, includes pieces of striking originality, intricate beauty and expressive power which can be ranked with the finest chamber music of Ravel, Janácek or Bartók. Outside Romania, however, most of Enescu's music is unknown, and the only pieces played at all frequently in the concert hall are his two early and far from typical Romanian Rhapsodies. Judging Enescu by those two pieces alone is rather like judging Ravel on the basis of Bolero and nothing else.

There are several obvious reasons for this neglect. One is the sheer multifariousness of Enescu's gifts, which meant that he was best known in America as a conductor, and in Europe as a violinist. Even in his own lifetime, therefore, his other talents helped to obscure and overshadow his vocation as a composer. Another reason for neglect was his peculiar homelessness as a national composer: although deeply attached to Romanian music, he was also a product of both the French and the Germanic traditions. He pursued his career as a performer mainly outside Romania, and his final years were spent in self-imposed exile from Communism. Never part of a movement or group of composers, he charted a very solitary compositional course. After his death, he was promoted (albeit with grotesque inefficiency) by the Communist regime in Romania as a national, folkloristic composer: this had the effect of narrowing his reputation, in European terms, still further. Only now can we in the West begin to discover the true range and richness of Enescu's creative legacy.