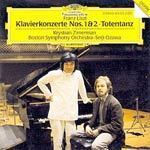 "Krystian Zimerman's record of the two Concertos and the Totentanz is altogether thrilling, and he has the advantage of excellent support from the Boston orchestra under Ozawa. It has poise and classicism."
(Penguin Guide)

Born in 1956 in Zabrze, Poland, Krystian Zimerman began playing the piano at the age of five; he later studied with Andrei Jasinski at the Music Conservatory in Katowice. Having achieved early success at a number of piano competitions, he embarked upon his international career after winning the 1975 Warsaw Chopin Competition where he was the youngest competitor.

Following the Warsaw competition, Krystian Zimerman made debut appearances in many European countries and also travelled to Paris to meet Artur Rubinstein. His Salzburg Festival debut in 1977 was followed by extensive tours in Japan in 1978 and the USA in 1979. In 1980 he appeared for the first time at the Lucerne Festival and the Salzburg Whitsun Concerts together with Herbert von Karajan.

In the following years Krystian Zimerman made numerous recital and concert tours in Europe, the USA and Japan. At the same time he made many recordings and also developed his repertoire, which encompasses works from Bach to Lutoslawski. At the 1988 Salzburg Festival he gave a performance of the piano concerto which Lutoslawski had composed for him and went on to play the concerto throughout Europe and the USA, as well as recording the work for DEUTSCHE GRAMMOPHON. A recording of the complete Beethoven Piano Concertos with conductor Leonard Bernstein was begun in Vienna in 1989. The cycle was left incomplete at the conductor's death but as a tribute to Bernstein, Zimerman recorded the remaining two concertos (in keeping with Bernstein's style) without a conductor. The pianist has worked with all the great orchestras in Europe and America under conductors as Pierre Boulez, Riccardo Chailly, Carlo Maria Giulini, Lorin Maazel, Seiji Ozawa, André Previn and Giuseppe Sinopoli.

Krystian Zimerman does not regard his greatest achievement as his prize-winning performances at numerous international competitions but the fact that he has managed to devote a period of time each season to the learning of new repertoire. Each year he adds one or more piano concertos, chamber works and a large number of solo pieces to his repertory. Over the past 21 years his repertory has grown to such an extent that he now commands more than 30 different programmes of solo works, and an equal number of piano concertos. In addition to around 50 concert appearances per year, Krystian Zimerman also gives chamber-music performances and master classes. Since 1986 the pianist dedicates up to twelve of his concerts each year to charitable purposes. In October 1996 he took up a teaching position at Basle's Academy of Music. In 1999 Krystian Zimerman formed a special orchestra for a tour in which he performs and conducts Chopin's piano concertos. The tour includes a concert marking the anniversary of Chopin's death in Paris.

Krystian Zimerman signed his first exclusive contract with DEUTSCHE GRAMMOPHON in 1976. His recordings include acclaimed performances of concertos by Schumann and Grieg (with Herbert von Karajan), Brahms (with Leonard Bernstein), Chopin (with Carlo Maria Giulini) and Liszt (with Seiji Ozawa. Prizes have been showered upon his recordings: Chopin's Ballades, sonatas for violin and piano by Strauss and Respighi with Kyung-Wha Chung, a recording of Schubert's Impromptus, Liszt's Sonata in B minor and his recording of the Lutoslawski Piano Concerto. Krystian Zimerman's complete recording of Beethoven's Piano Concertos, begun with conductor Leonard Bernstein, won the CD COMPACT AWARD 1993. His 1994 release of Debussy's Preludes is one of the most highly honoured recordings of the past few years; it was named "Record of the Year" and won the "Instrumental" category at the 1994 GRAMOPHONE AWARDS, and that same year received the CHOC DE L'ANNÉE and RITMO AWARD, followed by the ECHO KLASSIK PRIZE, EDISON AWARD, CANNES CLASSICAL AWARD, GRAND PRIX DE LA NOUVELLE ACADÉMIE, DIAPASON D'OR DE L'ANNÉE and GRAND PRIX DU DISCOPHILE RÉPERTOIRE in 1995. Krystian Zimerman was named "Solo Instrumentalist of the Year" at the CANNES CLASSICAL AWARDS 1995. His most recent releases feature a recording of Maurice Ravel's piano concertos recorded with the Cleveland Orchestra and the London Symphony Orchestra conducted by Pierre Boulez.