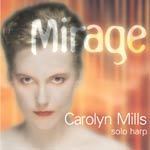 Lighter pieces arranged for the harp

Since 1989 Carolyn has held the position of Principal Harpist with the New Zealand Symphony Orchestra. She is Artist-Teacher of Harp at Victoria University of Wellington, and also teaches privately at her seaside home in Wellington, New Zealand.

Grew up and studied in USA
Growing up by the banks of the Mississippi River, Carolyn began playing the harp very young. In her teenage years, she travelled to Boston and Tanglewood to further her studies with renowned soloist and teacher, Lucile Lawrence. She gained a Master's Degree in performance at Boston University.
Prestigious awards
Carolyn became the first ever harpist to win the prestigious Boston University Concerto-Aria Competition, and debuted in Boston's beautiful Jordan Hall. She was also the recipient of several Outstanding Student Awards.

She recorded and performed many premieres for the Boston-based Composers in Red Sneakers, and her contemporary harp and percussion duo, TALEA, toured America playing numerous works written especially for them.

She became the world's southern-most harpist (and an avid penguin-watcher as well) when she accepted an engagement as Guest Artist aboard the MV Marco Polo for its 1995-96 Antarctica Voyages.

Current interests include Stroma, celtic harp and performing for school children
Carolyn is a founding member of the contemporary ensemble STROMA.

A recent recipient of the Montana Study Award, Carolyn travelled to the UK to study Welsh and Celtic harp traditions with Elinor Bennett, one of Europe's foremost harpists in both the classical and traditional styles.

Carolyn loves to play to the toughest and most critical audiences. She has taken her harp to thousands of primary school children in both New Zealand and the USA, and has received several grants from Creative New Zealand, Arts Council of Aotearoa, to take her widely-acclaimed School "Informance" Programme to rural communities all over the country.