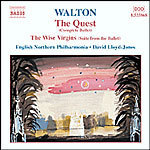 "If you care about Walton, or enjoy Diaghilev-style ballets of moderate length but great orchestral color and harmonic sophistication, you owe it to yourself to hear this terrific recording."
(10/10 ClassicsToday March 2009)

"Tightness of time may have influenced the wide range of borrowings in The Quest - from Vaughan Williams, Stravinsky and Walton himself - but the music is expertly crafted, with some masterful melody-writing in the final scene. The suite from The Wise Virgin, also undertaken for Ashton, makes an apt companion."
- Edward Bhesania, The Observer 30 June 2002

"It has some good, tuneful, occasionally dramatic music which deserves revival, especially in the composer's centenary year. And, using Walton's original scoring for the first time on disc, David Lloyd-Jones and the ENP make the best possible case for it."
- Anthony Burton, BBC Music Magazine July 2002

"The Quest, a truly major work, played more or less as Walton himself intended. If you care about Walton, or enjoy Diaghilev-style ballets of moderate length but great orchestral color and harmonic sophistication, you owe it to yourself to hear this terrific recording."
(10/10 ClassicsToday March 2009)

"This brilliant atmospheric performance from the English Northern Philharmonia under David Lloyd-Jones is all the more welcome for presenting the work for the first time in the composer's original orchestration...A colorful addition to the centenary junketings."
- Richard Wigmore, The Daily Telegraph 22 June 2002

Walton's characterful and highly theatrical score for his only original ballet, The Quest, is the most enigmatic of his entire œuvre. At forty minutes duration it constitutes one of his half-dozen most substantial works, yet since the limited run of the original production in 1943 it has received only two further performances, a first recording in 1990 and the present one. Part of the explanation lies in the fact that, in the confusion of wartime, Walton and the ballet company lost track of its whereabouts; only in 1958 was the score rediscovered in a warehouse in North London.

In 1943 the Sadler's Wells Ballet was in a very low state of morale because its chief choreographer, Frederick Ashton, had for two years been serving as an intelligence officer in the RAF. Thanks to the efforts of Kenneth Clark, the distinguished art historian, later author of the television series Civilization, he was suddenly given six week's leave to create a new ballet for the company. Ashton decided that Walton was the obvious choice of composer for a major new score, and to inspire and assist him, made a detailed timed synopsis of what was required, which Walton was to follow remarkably closely.

Less obvious was the subject matter that Ashton chose for his new ballet. This was a scenario prepared by his friend the writer Doris Langley Moore that was derived from the allegorical poem The Faerie Queene by Shakespeare's contemporary Edmund Spenser. Intractable material for a ballet, it might be thought, but as it featured St George and presented in graphic form the conflict between good and evil, it provided a good opportunity to present a morale-boosting patriotic spectacle at a low point in the war.

The conditions under which the ballet was created were far from ideal, quite apart from the very tight schedule imposed by the limitations of Ashton's leave. The company was on tour, while Walton was living in rural Northamptonshire. Getting the piano score of each hurriedly composed section to Ashton and the company was fraught with difficulty, and the composer frequently had to resort to bribing guards on trains to act as couriers.

Eventually choreography, orchestration and design came together, and the ballet received its première on 6th April 1943 at the New Theatre, London. Ninette de Valois' Sadler's Wells Company danced, scenery and costumes were by John Piper, Constant Lambert conducted and the cast included Margot Fonteyn, Beryl Grey, Moira Shearer and Robert Helpmann. Sadly the production failed to impress and did not stay long in the repertory, although both Ashton and Walton found an opportunity to tighten its structure.

The Quest
Siesta
The Wise Virgins