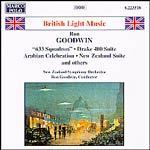 Ron Goodwin was born in Plymouth, Devon on 17 February 1925, the son of a policeman. Piano lessons that started at the age of five were continued in north west London where the family moved four years later. While at the local Willesden County School he took up the trumpet, and after transferring to Pinner County School developed his interest in the study of music theory, taking it as one of his matriculation examinations. While still at school he formed his own band - Ron Goodwin and his Woodchoppers - and gained useful practical experience with a series of semi-professional engagements, but, following his mother's assertion that music was 'not very respectable' and that he should get a 'proper' job, Ron became a junior clerk in an insurance office. Not for long, however, for using the office phone once too often to fix dates for his band, he was 'advised' by his boss to 'get a job in music'.

This 'job in music' was as a copyist with the music publishers Campbell, Connelly & Co. Ltd, which led to the chance of studying arranging with harry Stafford, and in the course, an appointment as arranger with the Parrmor Gold Orchestral Services, where There, Goodwin's work included arrangements for a weekly BBC Overseas series, Composer Cavalcade, covering composers from Noel Coward to Albert Ketelbey. He also played the trumpet with Harry Gold and His Pieces of Eight, and in his spare time studied conducting privately with Siegfried de Chabot of the Guildhall School of Music and Drama.

Following this, Goodwin became staff arranger for Edward Kassner, and started up an association with Alan Freeman who had inaugurated the Polygon label for Pye, thus having the opportunity to provide vocal backings for leading singers like Jimmy Young and Petula Clark, and arrangements for musical directors like Ted Heath, Geraldo and Stanley Black.

George Martin, the assistant A & R manager at Parlophone, helped Goodwin under contract to record some of his arrangements. Goodwin, then became musical director for countless artists, including Peter Sellers. The recording orchestra, 'Ron Goodwin and his Concert Orchestra' was also heard on radio programmes from Morning Music to Variety Playhouse, which Goodwin took over for the summer months from comedian / musician Vic Oliver. The first of his many LPs, Film Favourites, was followed by Skiffling Strings which, as with Swinging Sweethearts, went into the American hit parade and led to Goodwin's departure for the States for a series of television shows and radio dates. Another early success was Jet Journey, which became the signature-tune for the long running BBC TV series, What's My Line? It is not surprising that by 1975 he received a gold disc to mark sales of one million albums with the concert orchestra.

In more recent times Goodwin has travelled the world conducting concerts of film music with leading orchestras. He has won three Ivor Novello Awards and four certificates of honour. Particularly The Entertainment Music Award in 1972 made his outstanding contribution to British music. The same year he was nominated for a Golden Globe Award for his score of Alfred Hitchcock's Frenzy. In 1993 he was honoured a Fellow of the City of Leeds College of Music, and a year later received the coveted Ivor Novello Award for Lifetime Achievement in Music.