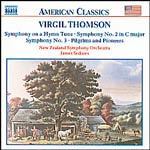 "the New Zealand Symphony is the best [Thomson recording] yet"

"The current offering by James Sedares and the New Zealand Symphony is the best [Thomson recording] yet, with a big, clear sound and some virtuoso work from several sections, for example, the brass. As a bonus, the New Zealanders include Pilgrims and Pioneers, here recorded for the first time. (Thomson wrote this in 1964 for John Houseman's Journey to America, a one-reel film that was shown four times an hour in the U.S. Pavilion at the New York World's Fair.) Finally, this recording's fine liner notes by Marina and Victor Ledin include Thomson's own program notes from the first performances of these works."
- American Music (Michael Meackna) Fall 2000

In the first half of the 20th century, Virgil Thomson became one of the leading figures among progressive American composers, his scores having individuality of expression while retaining a fascination with music from previous generations. Much of his musical education took place in France, where he was to live for the following fifteen years. From his early years he established two very differing styles that were to characterise his compositions, with progressive and almost intangible scores written at the same time as his more populist music. The four works included on this disc are among his immediately attractive scores, the Symphony on a Hymn Tune, dating from 1928, taking a somewhat humorous view of his favourite hymns. The Second Symphony came three years later, with a gap of forty years before the vivacious Third Symphony. Thomson equally achieved popularity with a number of film scores. Painting a picture of the early American settlers, Pilgrims and Pioneers, is taken from his highly descriptive music from the film Journey to America.

A Night In The Tropics