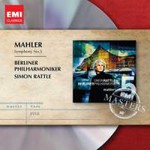 "This is a truly historic recording, made in the Philharmonie, Berlin during Sir Simon Rattle's first concerts with his new orchestra. Berlin was bedecked with posters welcoming Sir Simon to the Philharmonic (in English - a gentle reminder that his linguistic abilities lag behind his considerable musical ones), and Rattle didn't disappoint the Berlin audience. Theirs is a relatively short Mahler tradition, as Richard Osborne argues in his review, when he compares Barbirolli's Berlin Mahler from 1963." (Editor's Choice - Gramophone Magazine (Dec 2002)

"One element which Rattle brings out more than his rivals is the exuberance of Mahler's writing...This is above all a songful vision full of tenderness, with phrasing affectionately moulded in spontaneous warmth"
(Penguin Guide)

On the 7th September 2002, Simon Rattle takes up the post of Chief Conductor and Artistic Director of the Berliner Philharmoniker, to which he was elected in 1999. The inaugural concert programme includes Mahler's Fifth Symphony, which has been recorded live by EMI Classics.

"Going into it now I feel only exhilaration," says Rattle about his impending Directorship. " I can't wait to get on with it, to work with them, to hear them. In these last three years the orchestra and I have got to know each other and there is a feeling of astonishing support from this group of vast personalities. They are a group of individuals unparalleled in my history, with a fierce intelligence that can transform itself into loyalty and commitment".

In 1987 Rattle made his debut with the Berliner Philharmoniker in Mahler's Sixth Symphony. He has already made three recordings with the BPO for EMI: Liszt's A Faust Symphony, Mahler's Tenth Symphony in the Deryck Cooke completion, which won both a Grammy and a Gramophone award, and most recently Schoenberg's Gurrelieder. He has chosen Mahler's Fifth for his first programmes because "we wanted to have an enormous celebration, and we wanted to record something for EMI, which has been part of my musical family from the beginning. The piece is extraordinary; it is one of the hardest-won victories in Western music, and the last movement is almost painful in the triumph it brings. I think it's the last solely orchestral piece of Mahler's in which the triumph is unqualified." The recording will be the penultimate in Rattle's momentous and multi-award-winning Mahler symphony cycle on EMI.

The opening programme also includes Asyla, composed by exclusive EMI Classics artist, Thomas Adès. Rattle's EMI recording of Asyla with the CBSO, on CDC 5 56818 2, counts a Mercury Music Prize nomination and a Grawemeyer Award amongst its many accolades.

President of EMI Classics & Jazz Richard Lyttelton commented, "We are all very excited to be accompanying Sir Simon Rattle as he takes the helm of one of the world's greatest orchestras, the Berliner Philharmoniker. This year we are also immensely proud to celebrate the 25th anniversary of his exclusive relationship with EMI, a relationship that he chose to renew last September in Berlin, for a further seven years. We are greatly privileged that he wishes us to continue to preserve his remarkable musical legacy."

Rattle views the challenge of Berlin with excitement tempered with "good old-fashioned terror. If you don't go in with a little bit of respect and fear, then you're a fool. We are all in this together. Everyone cares about what they are doing, to the point of uproar. Emotions are very close to the surface and thank God for that because, when you get everyone going in the same direction, this is a force that cannot be resisted." As he begins his new relationship with the Berliner Philharmoniker, he is certainly thinking long-term and not expecting quick results: "As we begin this journey the expectations are so great that we will be bound to disappoint them. Give us time. And as I have always believed that it is better to journey than to arrive, then please, never consent to arrive!
Stay on the journey."

EMI Classics will release a deluxe limited edition of Mahler's Fifth Symphony in November 2002. This version will include extensive booklet notes and a bonus CD featuring an interview with Rattle by Nicholas Kenyon, Controller, BBC Proms, Live Events and TV Classical Music. He is the author of Simon Rattle: From Birmingham to Berlin, to be published in an updated paperback edition in October 2002 by Faber, UK; and Simon Rattle: Abenteuer der Musik, to be published in September 2002 by Henschel-Verlag, Germany.

Mozart: Clarinet Concerto in A / Clarinet Quintet in A