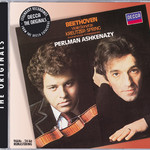 "The combination of Perlman and Ashkenazy in Decca's Legends series must take pride of place."
(*** Three Stars Penguin Stereo Guide)

"The interpretation and performance are as good as their reputations would lead you to hope ... they play together very well indeed. In the page of Adagio which opens the "Kreutzer", Perlman ... is quite magnificient. Technically, this performance is second to none ..."
Gramophone

Itzhak Perlman and Vladimir Ashkenazy's partnership has always been highly distinguished and fruitful, both on the concert platform and also in the recording studio. Their first recording for Decca (1968) was a coupling of César Franck's Violin Sonata with the Brahms Horn Trio (with Barry Tuckwell) and this was followed, in the 1970s, with a widely praised complete recording of the Beethoven Violin Sonatas (available complete on Decca 421 453-2).

Of Beethoven's ten Violin Sonatas the best-known are the 'Spring' Sonata (No.5) and the 'Kreutzer' Sonata (No.9) and they always make a strong coupling - as they do here, especially in such superb performances.

WHAT THE CRITICS HAD TO SAY
'Sparkling, alert performances that show unfailing vitality and musical imagination ... the 'Spring' sonata is given a refreshingly youthful yet classical reading with beautifully articulated playing from Ashkenazy and splendidly alive phrasing from Perlman. There is a welcome tautness about these readings and the sweet, beautifully controlled tone that Perlman commands is in ample evidence.'Gramophone

Extract from the sleeve notes by Eric Wen - teacher, critic and editor

Perlman and Ashkenazy, along with Barenboim, Du Pré and Zukerman, represented a refreshing new breed of musicians who took the international concert stage by storm in the early 1970s. Young and talented, they infused a sense of spontaneity and fun into the hitherto staid world of classical music. Their jet-setting lifestyles endeared them to a vast public, but belied their serious and often penetrating musical interpretations. Fortunately, their legacy of recordings now speaks for itself.

Perlman and Ashkenazy performed frequently in recitals together, but it was not until five years later that they embarked on recording the Beethoven cycle. Ashkenazy had already begun recording a number of the composer's piano sonatas, and Perlman, who had expressed his reverence for the Szigeti/Arrau cycle, felt ready to tackle one of the most challenging monuments of the violin literature.

West Side Story - The Making of the Recording