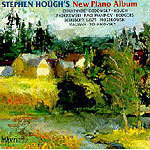 'Like any first-class dessert-tray, this one is addictive.' (International Piano Quarterly)

'This is a terrific disc. A master pianist reminds us that the piano can delight, surprise and enchant' (Classic CD)

'Stephen Hough is probably the most Protean pianist of his generation. Not only is he equally adept in the intellectual challenges of the Schumann Fantasie and the delightfully brainless acrobatics of the Award-winning Scharwenka Fourth, but, beyond that, he can tease out the pleasures from the trifles featured here with an old-fashioned wit - and a refreshing lack of pretension - that few living performers can match. What's most striking, on first hearing, is the finesse of his fingers, in particular the kaleidoscopic range of his colour and touch. As you listen again, you're apt to be struck even more by Hough's emotional poise ... Excellent.'
(International Piano Quarterly)

'Few recording pianists can match Stephen Hough in the flair with which he tackles trivial party pieces like the 20 varied items here. He gives such encore material sparkle and point that charms the ear' (The Guardian)

Back in the 80's Stephen Hough made two recordings for Virgin Classics which quickly became cult items among piano enthusiasts throughout the world. Using the title 'The Piano Album' those CD's featured a variety of the encore type pieces in which the pianist revels in the possibilities of his instrument, pieces designed to show off the performer as much as the music.
Stephen Hough's New Piano Album revisits this territory with a new selection of gems. This is the music of the great pianists of the past, and many, Rachmaninov and Paderewski to name but two, not only played such pieces but also wrote them. While times and styles have sadly changed, those who have heard Stephen Hough in concert know that at encore time this tradition is alive and well in his hands and that amongst the jewels of the past it is equally likely there will be a new Hough transcription such as the Carousel waltz included here.

This is a unique collection that will delight all fans of both Stephen Hough and romantic piano music.

Of ladies and love