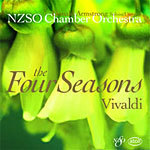 "In a market crowded with versions of these concerti, the NZSO Chamber Orchestra has given us a first-class, vivid, well-recorded reading. The solo passages feature Donald Armstrong obtaining the sweetest, liveliest tones from his 1754 Gagliano violin, and the contribution by the other players in the ensemble is outstanding"
- Bryan James, Otago Daily Times.

Legend has it that Antonio Lucio Vivaldi was born in Venice during an earthquake and in all the excitement he was baptised immediately. Little is known of his music education other than that his father, Giovanni Battista, a violinist at St Mark's, was capable of teaching him to a high standard. It took him ten years to become a priest, during which time he continued his violin studies. His father had been engaged under the surname 'Rossi' which suggests that the same red hair that earned Antonio the sobriquet 'il prete rosso' ('the red priest') ran in the family.

The Four Seasons: Le Quattro Stagione
Published in 1725, these are the first four of 12 concerti that make up Il Cemento dell'armonia e dell'inventione (The Contest of Harmony and Invention). Vivaldi prefaced each concerto with a sonnet 'to explain the music more easily'. The piece dazzles with its musical scene-painting and bravura solo violin part.

Donald Armstrong has been Music Director of the New Zealand Chamber Orchestra since its beginnings in 1987. He is currently Associate Concertmaster of the NZSO Chamber Orchestra and appears frequently as soloist. Before returning to New Zealand in 1987 he completed a Masters degree at the New England Conservatory in Boston, was principal second violin of the Tivoli Sinfoniorkester in Denmark, and Concertmaster of the Orchestre Philharmonique de Nice in France.
He plays a violin by Nicolo Gagliano of 1754.

Oscar Natzka - A Legend in his time

The Last Night of the Proms: Land of Hope & Glory