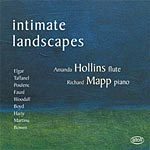 Amanda Hollins: Flute
Amanda Hollins studied at the Royal Northern College of Music with Trevor Wye and with Robert Aitken at the Banff School of Fine Arts, Canada. While living in England she pursued a busy orchestral and solo career, working extensively as Guest Principal Flute with the Bournemouth Symphony Orchestra and the London Mozart Players, while being a member of the Kent Opera and Glyndebourne Touring Opera orchestras.

Richard Mapp: Piano
Richard Mapp graduated from the University of Otago, and later undertook postgraduate studies at the Royal Academy of Music in London. His Wigmore Hall debut received very favourable reviews, and this encouraged him to spend over ten years based in London performing and teaching. He is currently Senior Lecturer and Head of Piano Studies at Massey University in Wellington.
Richard Mapp has given solo recitals, performed chamber music and concertos, and has made radio recordings in more than a dozen countries. His 1999 CD of music by Granados for Meridian Records was extremely well reviewed in the BBC Music Magazine.