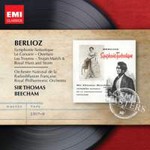 Rosette Recording (highest rating) Penguin Stereo Guide - 'If you want a genuinely French Symphonie fantastique, wonderfully performed and superbly recorded, go out and get this release before it's snapped up by your neighbour.' (Gramophone)

'There is something irremovably French about Berlioz's score that demands a French orchestra, and the one that plays here for Beecham is France's finest. If you want a genuinely French Symphonie fantastique, wonderfully performed and superbly recorded, go out and get this release before it's snapped up by your neighbour.' (Gramophone)

"The 1844 Corsaire Overture, after Byron's work, receives an opulently vital reading from Beecham, the string, brass, and woodwind virtuosity apparent in every measure. A spirited Trojan March from Les Troyens leads to The Royal Hunt and Storm from Act IV, featuring the brilliant Dennis Brain in the French horn part, only a few months prior to this untimely death. The Symphonie fantastique, the second such inscription with the French National Radio Orchestra, constitutes Beecham's stereo version. Here we know why Pierre Monteux dubbed Beecham "Le Grand Baton," since the performance emanates evocative flair, sumptuous energy, driving passion, and a panoply of color that augments the natural evolution of the program."
(AudAud April 2011)

Sub-titled 'Episode in the Life of an Artist', this remarkable programme-symphony was recorded twice: first in mono in 1957-8, and then, in 1959, in this even more vivid stereo. The couplings, played by Beecham's own Royal Philharmonic Orchestra, are favourite shorter pieces by Berlioz: the Overture Le Corsaire (in a performance described in Gramophone as an 'outstanding winner') and the two famous orchestral extracts from the opera Les Troyens.