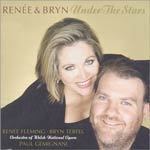 Under The Stars: Music from the shows
Bryn Terfel (bass) Renee Fleming (soprano) with the Orchestra of the Welsh National Opera conducted by Paul Gemignani

Renée Fleming and Bryn Terfel are two of the world's most popular classical stars. Their first CD together is Under The Stars, a feast of great songs from recent musical theatre.

Under The Stars is an album of glorious melodies and superb singing from two of the world's greatest voices. It is the ideal album for Broadway aficionados, as well as fans of Renée and Bryn .

The album includes the best of recent Broadway musicals from composers including Stephen Sondheim and Andrew Lloyd Webber. The shows represented include much-loved favourites such as The Music Man, (76 Trombones), Kiss Me Kate (So In Love) and The Phantom Of The Opera (All I Ask Of You) as well as more contemporary hits such as Sondheim's Passion and Sweeney Todd as well as songs from The Mystery of Edwin Drood, Ragtime (Wheels of a Dream) and the recent Romeo and Juliet.

Renée Fleming is the most popular soprano in the classical world today. Renée draws on her unique palette of vocal colours to perform these songs with deeply felt emotion and real Broadway style.

Bryn Terfel often performs broadway songs in concert to enormous acclaim, and his rich baritone voice coupled with his ability for characterisation, is ideally suited to great musical theatre singing. He has had enormous success with albums of associated repertoire (which have been released on Deutsche Grammophon - 'Something Wonderful' & 'If Ever I Would Leave You').
Bryn Terfel sings "Pretty Women" from Sondheim's Sweeny Todd - he performed the title role in Sweeney Todd in Chicago in November/December 2002.]

'Under The Stars' was recorded in the Brangwen Hall, Swansea, in Bryn Terfel's home country of Wales. Legendary conductor Paul Gemignani, who was musical supervisor on many of the original Broadway productions, directs the Orchestra of the Welsh National Opera in this sumptuous recording.

'Under The Stars' is produced by Phil Ramone

A Song in My Heart