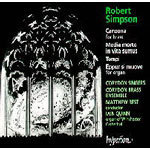 'All the performers do the music proud. Simpson aficiados will need no persuasion to buy this marvellous disc, but enthusiasts for the organ and choral music of our century have every reason to make its acquaintance too'
- Hi-Fi News

Like Beethoven, Robert Simpson generally conceived his music instrumentally rather than vocally. He confessed to being uneasy when faced with the task of word-setting. However, both the choral works recorded here resolve the problem with originality (and, in the case of Tempi, humour), leaving no doubt that Simpson's handling of choral forces is capable of a wide expressive range and great physical impact.

In media morte vita sumus ('In the midst of death we are in life') is for mixed chorus, brass and timpani. The text is Simpson's own, translated into Latin. In the composer's own words, it 'outlines a simple and practical morality without which humanity must be at lethal risk. It has nothing to do with religion, and explains itself'.

The text of Tempi consists entirely of familiar Italian musical terms ('Allegro grazioso', etc) whose meanings are reflected in the music.

Eppur si muove (Ricercar e Passacaglia) is Simpson's only work for organ and is cast in one enormous movement in two large sections. The title means 'But it does move' and is what Galileo is said to have muttered on being forced by the Church to recant his view that the earth revolved round the sun.