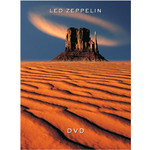 Clocking in at nearly five and a half hours, "LED ZEPPELIN DVD" has been culled from just a handful of performances which were ever filmed during the band's extraordinary lifetime. As guitarist Jimmy Page explains, "We were never really part of the pop scene. It was never what Led Zeppelin was supposed to be about. Our thing was playing live. In that sense, Zeppelin was very much an underground band. The fact that it became as successful as it did was something that was almost out of our control. We actually shunned commercialism, which is why so little official footage of the band has ever been seen before."

Featured are performances from: London's Royal Albert Hall in January 1970, just one year after the release of their debut album; their triumphant five-night run at London's Earl's Court in May 1975; and their record-breaking shows at England's Knebworth Festival in August 1979, just one year before the death of drummer John Bonham led to the band's dissolution. Also included are songs from New York's Madison Square Garden in July 1973 which were not included in "THE SONG REMAINS THE SAME" concert film, the only previously released live Zeppelin footage. Other highlights of the DVD include: extremely rare television appearances, among them a performance for Danish television in March 1969; promotional clips; TV interviews; behind-the scenes material; and even a bit of fan-shot "bootleg" footage.

2003 marks the 35th anniversary of the first fateful rehearsal which brought together the talents of guitarist Jimmy Page, vocalist Robert Plant, bassist/keyboardist John Paul Jones, and drummer John Bonham in the summer of 1968. Universally recognized as one of the most innovative, powerful, and influential groups in rock history, Led Zeppelin has sold some 200 million albums worldwide. This is all the more impressive considering that the band only existed for a comparatively short 12-year period. In the decade between 1969 and 1979, the British quartet released eight studio albums and a live soundtrack (a posthumous set of previously unreleased studio material followed in '82).

While their work in the studio was brilliant, Led Zeppelin's work onstage was transforming. In concert, the band displayed a power and charisma unparalleled in modern music. Never content to simply replay their recordings, Zeppelin used the stage as a creative platform in its own right - introducing material live before it was recorded, and always expanding, improvising, and pushing into uncharted territory. Their legendary, epic live sets - often lasting more than three hours - were shamanistic experiences which traversed exceptional musical territory, sonic journeys which were truly cathartic experiences for the band and audience alike.

The Strat Pack - Live in Concert

The Kids are Alright

The Fat of the Land