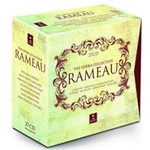 September 12th 2014 marked 250 years since the death of Jean-Philippe Rameau (1683-1764), whose sumptuous and exquisitely crafted works for the theatre represent a peak of achievement in French music.

This 27-CD budget-price box brings together nine of his operas and music from four of his other stage works, all in performances led by seven conductors who played a leading role in the revival of interest in Rameau's music over the past 30 years. All the recordings in this box, first released by Erato between 1974 and 2002, made an important contribution to re-establishing the composer's reputation as a master of musical theatre.

In recent decades, performances of Rameau's operas -- particularly Hippolyte et Aricie, Platée and Les Indes galantes, but also Castor et Pollux and Les Boréades - have become more frequent in France and internationally. In recent years, his works have been performed at prestigious venues as diverse as the Opéra National de Paris, English National Opera, Glyndebourne Festival Opera and the Theater an der Wien. If they lack the more direct appeal of the Italian(ate) operas of Handel and Vivaldi - which have proved incontrovertibly that Baroque opera 'speaks' to today's audiences - they are works of great beauty and subtlety, and, when stylishly performed, possess considerable dramatic power.

They represent the peak of achievement in French baroque opera. Rameau took the elaborate form, the tragédie lyrique, established by his predecessor Jean-Baptiste Lully (1632-1687), and handled it with great technical and expressive subtlety, and with a striking sense for vocal and instrumental colour. The French style of baroque opera, as embodied by Lully and Rameau, is more fluidly constructed than the Italian style, and demands a different kind of vocal and expressive virtuosity: its prime vocal emphasis is on subtly-coloured dramatic declamation rather than on spectacular vocal agility. The tenor voice (rather than the castrato), the chorus and the ballet also play a far more central role than in Italian baroque opera.

Jean-Philippe Rameau was born in Dijon in 1683 and died in Paris in 1764. He first achieved recognition as an organist and theorist (notably with his influential Traité de l'harmonie, published in 1722), and as a composer of keyboard music. His first opera, Hippolyte et Aricie, a tragédie lyrique based on the story of Phaedra, was performed in 1733, when he was 50, arousing both admiration and controversy. The peak of his career as an operatic composer came in the 1740s - he wrote nine stage works over the decade, and he was appointed to the court of King Louis XV in 1745.

In the 1750s, following the success in Paris of Pergolesi's comic opera La serva padrona, a battle, known as La Querelle des Bouffons, ensued between supporters of the French and Italian operatic styles. The philosopher, writer and composer Jean-Jacques Rousseau became a strident advocate of opera in the simpler Italian style, denigrating the elaborate French style represented by Rameau.

Rameau's operatic canon, in addition to works on exalted tragic and heroic themes, includes lighter-hearted works - such as Platée, described as both a comédie lyrique and a ballet bouffon, and Les Indes galantes, a spectacular opéra-ballet set in the Middle East and the Americas. He is recognised as one of the most important and influential of all French composers; Debussy, for instance, admired him greatly, even including a piece called Hommage à Rameau in his Images for piano, while his opera Pelléas et Mélisande can be seen as drawing on the tradition of the tragédie lyrique.

All the conductors in this collection are acknowledged masters of the French baroque style and played an important role in the Rameau revival that took place from the 1970s onwards: William Christie, John Eliot Gardiner, Nikolaus Harnoncourt, Marc Minkowski, Nicholas McGegan, and their predecessors, Jean-François Paillard and Raymond Leppard.

Among the singers are such names of the past and present as: Frederica von Stade, Lorraine Hunt, José van Dam, Christiane Eda-Pierre, Jean-Paul Fouchécourt, François Leroux, Sarah Connolly, Mark Padmore and John Tomlinson.

"Another spectacular French Baroque masterpiece comes to life under the inspired direction of William Christie. Rameau's Zoroastre is a thinly disguised advertisement for the ideals of Freemasonry. This perfornance, with Mark Padmore in the title-role - and making his second major appearance this month (he's McCreesh's Evangelist on the Record of the Month) - is a triumph, an overwhelming experience and a real feast for the ears. Another Christie winner!" - Editor's Choice Gramophone June 2003 for Zoroastre

"If you're not familiar with Rameau's operas, the one word I'd use for them is smooth. The lush orchestration, the flowing melodies make them delightful to listen to. However, there are far fewer arias that stand out than, say, in Handel. With Rameau, it's more about a tone, rather than a collection of songs, which some of Handel's operas sound like. There are more choruses and dances than in the Italian opera of the time, and recitatives are more than just people speaking and filling in the spaces between the music. Listening to a Rameau opera is more about taking in a whole work than enjoying specific parts." (MusicWeb Jan 2015)

with extraits from:
Zéphyre
Naïs