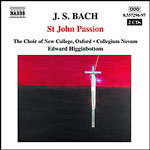 "Edward Higginbottom is one of those rare musicians who can balance projects of genuine popular appeal ('Agnus Dei', 'Early One Morning' and so on) with the key masterpieces of the choral repertoire. With this Naxos set of the St John Passion he could potentially reach his largest audience yet - the price attracting the casual purchaser. In which case, he or she will not be disappointed, especially with the glorious singing of the now world-renowned Choir of New College, Oxford."
- Editor's Choice - Gramophone Magazine (June 2003)

"This new recording of Bach¡≈s St John Passion has much to recommend it. James Gilchrist is a sweet toned Evangelist, John Bernays an ardent, not too pained-sounding Christ. The New College choir are always excellent, nimble and accurate in choruses and serene in director Edward Higginbottom¡≈s thoughtfully varied and crafted chorales."
- Christopher Wood, The Independent, April 20, 2003

Bach outlived himself. At the time of his death in 1750 he was regarded by an ever-increasing number of people as yesterday's man, a brilliant, awe-inspiring, if rather turgid anachronism, out of touch with the spirit of his time. Simplicity was in, complexity was out. Only three years after Bach's death, the French philosopher and self-styled composer Jean-Jacques Rousseau swept aside with a stupefying arrogance everything Bach had stood for:

'Fugues, imitations, double designs, and all complex contrapuntal structures ... these are arbitrary and purely conventional devices which have hardly any merit save that of a difficulty overcome - difficult sillinesses which the ear cannot endure and reason cannot justify. They are evidently the remains of barbarism and bad taste, that only persist, like the portals of our Gothic churches, to the shame of those who have had the patience to construct them.'

Four years after that was written, Wolfgang Amadeus Mozart was born in Salzburg. Bach's music played no part in his upbringing. He may not even have known of his existence. Johann Christian Bach he knew. Carl Philipp Emanuel Bach he knew of. But Johann Sebastian? He might have heard him mentioned in passing as their father, but it could well be that Johann Christian, Bach's youngest son, never thought even to mention him. It was not until he was at the height of his career that Mozart first came across the music of Johann Sebastian, and it changed his life.

It has changed the life of many, by no means all, or even most, of them musicians. The universality of experience reflected in Bach's music far transcends his own profound religious faith. Yet in one sense, and one only, his faith was his sole limitation as a chronicler of humanity's inner life: it barred him from despair. He was no stranger to suffering, but taken as a whole his music is suffused by joy, and of a profundity beyond the limits of mere happiness. No composer's music is so deeply imbued with the spirit and styles of dance, and his spirituality was matched, and complemented, by his robust physicality. There are dances aplenty even in a work as awesomely serious and harrowing as the St John Passion, which ends with a sarabande). Yet there is scarcely a work of his, however slight, however light, that is not consecrated in spirit to the glory of God. His overtly sacred works give us perhaps the most comprehensive portrait of religious experience ever achieved.

Bach wrote four Passion settings, one for each of the gospel writers. Of these, only two, the St John and the St Matthew, have survived in their entirety, but the 'entirety' of the St John Passion is difficult to determine, since Bach made four different versions of it, over a span of almost 25 years. Of these, interestingly, the last reverts very largely to the first, though using larger forces and a greater variety of instruments. The apportionment of rôles, however, is common to all. A solo tenor, taking the part of the Evangelist, serves as the narrator, the individual protagonists are sung by soloists, and the words of groups of people, whether portraying the crowd, commenting on the action or reflecting on its significance, are naturally taken by the choir.

The St Matthew and St John Passions have always aroused controversy, though Bach can hardly have been surprised. One of the requirements of his job as Cantor of the St Thomas School in Leipzig was that he should "so arrange the church music that it shall not be too long, or of such a nature as to have an operatic character." In each work, Bach offended on both counts. The St John Passion runs to nearly two hours, the St Matthew to almost three, and each uses operatic conventions, if not operatic styles. With their recitatives, arias and choruses, with the soloists taking specific 'rôles', both works have struck many people, in Bach's time and even in our own, as too operatic by half. And the St John Passion is so vividly and unashamedly dramatic in its imagery, layout and styles that Bach seems almost to have been courting the controversy which it so predictably aroused. Certainly no opera (let us refine that to the music of no opera) is more searingly dramatic or more masterfully coloured. Nor is it easy to think of any work, operatic or otherwise, in which the word-painting, the milking of language itself for its dramatic and illustrative properties, is more powerful, even terrifying. The repeated baying of the mob Kreuzige ihn! (Crucify him!), the hatred with which they shout the name of their chosen victim, Jesum von Nazareth!, the bloodthirsty fanaticism as they cry out Barabbas!, all of these are almost unbearable in the intensity and vividness of their presentation. They also far exceed the dramatic scope and theatrical flare of all Baroque opera composers, including even Monteverdi.

But the St John Passion is not an opera. It is an overwhelming act of worship, specifically designed for the Vesper service on Good Friday, where a sermon separated Parts I and II. Among the most striking differences between the St John Passion and an opera is Bach's clear intention of drawing the congregation into the drama, most notably through his placement throughout the work of well-known chorales (which would have been familiar to every worshipper in the Lutheran tradition), rather than treating it as an audience of passive 'spectators'. Being manifestly a feature of the present (for the congregation), the use of these chorales serves also to highlight the eternal relevance of the historical events being depicted to the faith and ethos of the modern believer. A further instance of the same impulse is the treatment of Christ's words. Whereas in the St Matthew Passion these are accompanied and illumined by what has been described as a 'halo of strings', in the St John Passion they are not only represented as ordinary human speech but supported by continuo alone. The effect of this, conforming to the treatment of every other character in the drama and thus blurring the distinction between Jesus and the rest, is to emphasize Christ's humanity and to underline the very human tragedy of his sufferings. To say that the work is less formally devotional, less meditative, less reflective than the St Matthew Passion is not to say that it is in any sense less religious. The resonance of faith is incandescent throughout, but it derives its particular quality from the perspective of St John's text, which differs in many respects from St Matthew's (not least in the virulence of its anti-semitism - a feature, incidentally, which would strongly have appealed to Luther).

In terms both of numbers and of instrumental colour, Bach clearly conceived the work for larger and more variegated forces than were normally available to him. The use of two keyboard instruments for the continuo (harpsichord and organ) and the importation of such outmoded interlopers as violas d'amore, viola da gamba and lute, as well as transverse flutes, also indicate the degree to which he drew on specific types of sonority for the reflection and amplification of differing moods and circumstances. But then the immensity and power of the story he was telling demanded nothing less.
- Jeremy Siepmann

Rutter: Requiem and other Sacred Music