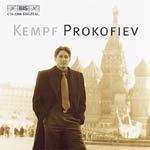 "A youthful virtuoso tackles Prokofiev head on and the results are thrilling."
(Gramophone Awards Issue 2003)

Three years ago, a little-known young pianist released his second disc with BIS. The pianist was Freddy Kempf and the music was by Rachmaninov.

The CD was very warmly acclaimed - Gramophone stated that "This is a very special record." and American Record Guide wrote "Kempf's sympathy with this repertoire is, in fact, frankly outstanding [...] This is a deeply, deeply satisfying recording."

Since then Freddy Kempf has released a total of six CDs (including the recent Kempf Trio recording of piano trios by Tchaikovsky and Rachmaninov), and on this one he returns to the Russian territory that he loves so much.

The programme chosen by Kempf is intriguing, including some of the earliest works Prokofiev wrote - at the age of only 18 - namely Piano Sonata No. 1 (Op. 1) and Étude No. 1 (from Op. 2), as well as works by the mature master.

Prokofiev: A Portrait: His works / His life (2 CDs of music plus a detailed essay and photographs)
more suggestions…