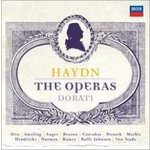 Haydn's operas are still something of a rarity both in the theatre and on record. Antal Dorati's advocacy of Haydn's music during the 1970s resulted in numerous award-winning recordings including his legendary cycle of all the symphonies as well his series of operas for Philips.

The eight opera recordings were made with the Orchestre de Chambre de Lausanne during the late 1970s and went on to achieve international distinction and acclaim.
These pioneering recordings also introduced many singers who were in the early stages of their careers. Some of the names associated with these recordings include Elly Ameling, Arleen Auger, Ileana Cotrubas, Jessye Norman, Samuel Ramey, Anthony Rolfe Johnson and Frederica von Stade.