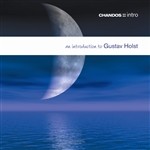 'In every respect this latest Holst anthology from Chandos will be hard to beat. The recording is superb - very real indeed…' The Penguin Complete Guide

The early 20th-century British composer, Gustav Holst was deeply influenced by England's countryside and folksong, and adopted a consciously nationalist style in his music. The Planets is full of high voltage writing, with an acute feeling for atmospheric colour. Scored for a very large orchestra it is joyful, magnetic and powerful and a brilliant introduction to Holst.

Three of Holst's most famous works are gathered on one bargain CD.

Gibson's performances of The Planets was a famous demonstration CD on its initial release, being both the first digital recording of this work and the first available on CD. It remains sonically spectacular.

The Dream Of Gerontius