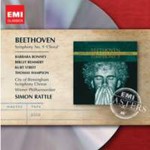 "These discs are history: nine indubitable masterpieces lovingly recorded in gripping reinterpretations of our age."
(NZ Herald on the complete set)

Simon Rattle conducts the Vienna Philharmonic Orchestra in live concerts recorded between 29 April and 17 May 2002 at the historic Musikverein in Vienna. Joining Rattle as soloists in the Symphony No.9 are Barbara Bonney, Birgit Remmert, Kurt Streit, and Thomas Hampson

"Rattle's long-awaited Beethoven cycle with the Vienna Philharmonic is on the whole a triumph - a superbly played account by one of the world's great orchestras, under a conductor whose historically aware performances never fail to stamp the music with real personality. Rattle's must now be the strongest recommendation among modern Beethoven cycles."
***** Five Stars (Pick of the Month) BBC Music Magazine (April 03)