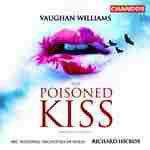 "So it's a damp pastiche of G&S: does that matter when the music is so glorious?"
- Editor's Choice (Gramophone Magazine) January 2004

"Vaughan Williams's fourth opera, The Poisoned Kiss, was written at the same time as work on Sir John in Love and the first sketches for the masterpiece, Job. The works that VW drew on for inspiration (formal and structural perhaps, rather than melodic or harmonic) are as disparate as The Mikado and The Magic Flute. The opera may have a rather twee feel, but there is too much good music to leave it neglected. Hickox makes as good as case for the piece as can be imagined. Well worth exploring."
- Editor's Choice (Gramophone Magazine) January 2004

This is the premiere recording of Vaughan Williams's opera The Poisoned Kiss.

This romantic extravaganza contains some of the composer's finest music, and a sense of fun runs throughout the delightful score.

Richard Hickox is famous for his championship of British twentieth century music, and is a conductor with a special affinity for the music of Vaughan Williams. His award-winning recordings of the composer's work for Chandos are now generally cited by critics as top choice for the repertoire.