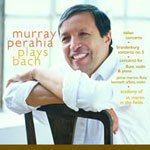 "Perahia's Bach registers as forthright where needed and quietly (and distinctively) supportive when other players take a lead. This is not just Bach for people allergic to period performances, it's for people for whom great music and great music-making are paramount."
- Recording of the Month (Gramophone Magazine Dec 2003)

"Perahia is one of the piano's most lyrical contemporary poets." - The London Times, June 1997

Pianist Murray Perahia is constantly exploring new directions both in his distinguished concert career and his longstanding exclusive relationship with Sony Classical, now in its third decade. The pianist has won worldwide acclaim in recent years for his Sony Classical recordings of the keyboard music of J.S. Bach. Commemorating the 250th anniversary of Bach's death, Perahia made his first recording of Bach's Goldberg Variations (released September 2000), winning a Gramophone Award and a Grammy nomination. Perahia has also undertaken his first conducting post, as Principal Guest Conductor of the Academy of St. Martin in the Fields, the London orchestra with which he has a long and productive relationship. He has collaborated with this orchestra on a pair of Sony Classical releases of Bach's keyboard concertos, with Perahia conducting from the keyboard. The first volume (SK 89245) was released in 2001, and the second volume (SK 89690) was released internationally in March.

Perahia's other recent Sony Classical recordings - Songs Without Words (SK 66511), (featuring transcriptions of Liszt, Schubert and J.S. Bach, in addition to Mendelssohn's "Songs Without Words"), Bach's complete English Suites (in two volumes: Nos. 2, 4 and 5 (SK 60277) and Nos. 1, 3 and 6 (SK 60276)), Robert Schumann's complete works for piano and orchestra (SK 64577) and a disc that includes Schumann's Sonata No. 1 and Kreisleriana (SK 62786) - reflect an artistry that led BBC Music magazine to describe him as "the world's subtlest keyboard conjurer." Perahia's disc of Handel and Scarlatti keyboard works (SK 62785) won the Gramophone Instrumental Record of the Year Award, and his recording of Bach's English Suites Nos.

1, 3 and 6 (SK 60276) received the 41st Annual Grammy Award for Best Instrumental Soloist Performance (Without Orchestra). This disc has also been awarded Classic CD magazine's "Best Instrumental Disc of 1998." Perahia's Goldberg Variations (SK 89243) won Gramophone's Award for Best Instrumental Recording, was nominated for two Grammy Awards ("Best Classical Album" and "Best Instrumental Soloist Performance without Orchestra), was on the Top 10 Billboard Classical Chart for 15 weeks, was voted disc of the month by Gramophone and Classic CD, was the No. 1 classical album in France and Italy, and received a Diapason do'r, 10 de Repertoire and FFFF de Telerama in France.

Murray Perahia performs in all of the major international music centers and with every leading orchestra. In September 2000, he was appointed principal guest conductor of the Academy of St. Martin in the Fields, with whom he toured as Conductor and Pianist through the United States in March of 2001. He also performed with the orchestra in Japan and Southeast Asia in April of 2002. His orchestral engagements in the 2002-03 season include a performance at the newly founded Celibidache Festival in Munich; performances of the Beethoven concertos with the Philharmonia Orchestra, conducted by Wolfgang Sawallisch; and tours of the northern U.K. and Eastern Europe with the Academy of St. Martin in the Fields. Perahia will play Bach's Goldberg Variations in a recital tour of Italy in October and November, and he is scheduled to appear in recital in October at the Concertgebouw in Amsterdam. He also returns to the U.S. in the spring to play recitals in New York (Carnegie Hall), Boston, Newark, Toronto and the Atlanta area.

Perahia was born in New York. He started studying the piano at the age of four, then at seventeen entered The Mannes College of Music, where he graduated in conducting and composition. His summers were spent in Marlboro, Vermont, where he met and collaborated with musicians such as Rudolf Serkin, Pablo Casals and the members of the Budapest Quartet. He also studied at that time with Mieczyslaw Horszowski.

After winning the Leeds International Piano Competition in 1972, Perahia received many invitations throughout Europe. In 1973 he gave his first concert at the Aldeburgh Festival, where he met and worked closely with Benjamin Britten and Peter Pears. He accompanied Pears in many lieder recitals and, between 1981 and 1989, served as co-artistic director of the Aldeburgh Festival. Later, he developed a close friendship with Vladimir Horowitz, whose perspective and personality have been an abiding inspiration.

Perahia's many recordings include the complete Mozart piano concertos (in which he conducts the English Chamber Orchestra from the keyboard), the complete Beethoven concertos (with the Concertgebouw Orchestra conducted by Bernard Haitink), the two Mendelssohn and Chopin concertos, and the Schumann and the Grieg. He has also made numerous solo recordings of works by Schubert, Schumann, Mozart, Mendelssohn, Chopin, Beethoven and Bartók. Perahia collaborated with Peter Pears in an all-Schumann disc and with Dietrich Fischer-Dieskau in a complete recording of Schubert's Winterreise. His chamber music recordings include Bartók's Sonata for Two Pianos and Percussion with Sir Georg Solti - winner of a 1989 Grammy Award - and the Brahms G minor Piano Quartet with the Amadeus Quartet. The pianist also won the 1995 Gramophone Award for his Sony Classical recording of the Chopin Ballades.

Murray Perahia is an honorary fellow of the Royal College of Music and the Royal Academy of Music, and he recently received an Honorary Doctorate from the University of Leeds.