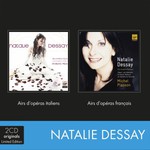 French soprano Natalie Dessay is one the stars of today's operatic world, thrilling audiences as both a singer and an actress.

Born in Lyon in 1965, Natalie Dessay grew up in Bordeaux. She first dreamed of becoming a dancer, but later studied acting and singing at the Bordeaux Conservatoire. She progressed with extraordinary rapidity, completing five years' worth of study in just one year and graduating with First Prize at the age of twenty. In 1989, after a brief period in the chorus of the Théâtre du Capitole de Toulouse, she entered France's first Concours des Voix nouvelles and won second prize. This led Dessay to further studies at the Paris Opéra and also brought her to the attention of the agent Thérèse Cédelle - still her agent today - and to her first major engagements as a soloist.

In 1992 she sang her first Olympia in Offenbach's Contes d'Hoffmann at Paris's Opéra Bastille in a staging by Roman Polanski. The next year she was invited to the Vienna Staatsoper to sing Blondchen (Die Entführung aus dem Serail). In 1993 she was Olympia in the opening production for the rebuilt Opéra de Lyon and by 2001 she had performed the role in eight different stagings of Hoffmann, including her debut appearance at La Scala. The 1990s also brought the Queen of the Night at Aix-en-Provence, Ophélie (Hamlet) in Geneva (she also sang the role at London's Royal Opera House and at Barceona's Liceo in 2003, where the production was filmed for DVD), Aminta (Die schweigsame Frau) in Vienna, Fiakermilli (Arabella) for her debut at the New York Met, which was soon followed by Olympia and Zerbinetta, Lakmé at Paris' Opéra Comique (she recorded the role for EMI Classics [now Warner Classics] with Michel Plasson), Eurydice in Offenbach's Orphée aux Enfers in Lyons (also recorded for EMI Classics), and, in Paris, Morgana in Handel's Alcina and the title role in Stravinsky's Le Rossignol. Conductors for these appearances included Pierre Boulez, James Levine, James Conlon, William Christie and Marc Minkowski.

"Natalie Dessay is a force of nature. A consummate artist, too, who takes risks up on the high vocal wire when other singers woudl be playing it safe down in the ring."
(BBC Music on the French Arias)

"Dessay's facility with ornamentation and giddy high notes, and her sense of French style are unbeatable. So this is an album not be missed for fans of great singing, or for anyone looking to explore some less-traveled roads of French opera." (AllMusic on the French Arias)

"Dessay's voice is light, and while she may not have the vocal heft of many of the singers who take on these roles, the delicacy and youthfulness of her voice are often ideally suited to the characters' tenuous emotional conditions, particularly Lucia, Elvira, and Giulietta. She has plenty of substance to easily soar over the orchestra, though, and her coloratura is absolutely secure. The overall impression is that she has nothing to prove, she's simply using her superb instrument to deliver what the composer asked for, with assurance, intelligence, and passion. Evelino Pidò leads Concerto Köln and Europäischer Kammerchor in performances that match Dessay's intensity." (AllMusic on Italian Arias)

Castro-Robinson: The Gristle Of Knuckles