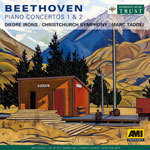 Diedre Irons was born in Winnipeg, Canada. A child prodigy, she made her first solo appearance with the Winnipeg Symphony Orchestra at the age of twelve playing Schumann's Piano Concerto.

After graduating from the Curtis Institute of Music in Philadelphia, she was invited by her teacher, Rudolf Serkin, to join the faculty of that prestigious conservatory. She taught there for the next seven years, at the same time touring extensively in Canada and the United States both as a soloist and as a chamber music player. She avoided the international competition circuit, believing the aims of competing to conflict with those of music.

She moved to New Zealand in 1977 and has since become a vital part of the new Zealand music scene, performing frequently with the New Zealand Symphony Orchestra, the Auckland Philharmonia and the Christchurch Symphony Orchestra. She has toured many times under the auspices of Chamber Music New Zealand, and recorded extensively for Radio New Zealand. She continues to travel internationally, having to date performed concerts in 25 countries.

Diedre was awarded an MBE for services to music in 1989. She is currently senior lecturer in piano at the University of Canterbury.