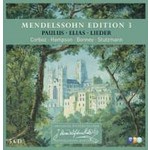 "Stutzmann's gloriously rich, true contralto tones suggest riches and depths not always suspected in these songs." (MusicWeb on the Lieder)

"Mr. Hampson is a particularly fine Mendelssohn interpreter. I first encountered his voice as that of St. Paul in the 1986 Michel Corboz recording of the early oratorio "Paulus"… it is lovely and inspiriting, and when I return to it, I generally reach for Mr. Hampson's performance, well supported by those of all concerned." New York Times

"Mendelssohn's Lieder have had a pretty bad press over the years but this disc certainly presents a convincing case for them, even if we can hardly avoid reflecting that Auf Flügeln des Gesanges is with good reason the best known. However, it is also unfair that it should have eclipsed the others so totally since there is an unfailing supply of attractive melody and some inventive piano writing. Scheidend is a particularly beautiful piece which perhaps deserves to stand alongside Auf Flügeln in the Pantheon of immortal songs. Perhaps the problem is that Nathalie Stutzmann has not always been around to sing them, for her gloriously rich, true contralto tone - worth listening to for its own sake - suggests riches and depths which the light soprano more traditionally associated with this repertoire perhaps does not. She is also marvellously attentive to the words, finding scope for dynamic variations when the setting is strophic and thus showing that, if Mendelssohn sometimes seems on paper to be writing a tune first and fitting the words to it afterwards, in reality he leaves ample space for the singer to express the words if he/she wishes to do so.

Dalton Baldwin's contribution is much to be admired, not least for his keeping the textures light and clear when every song is sung at least a tone lower than written and some are down as much as a fourth, giving the piano considerable potential for grumpiness. Just to show that I have not lost my critical teeth, I'll have to point out a few queries. In Scheidend they choose to eliminate a bar, maintaining the even 16th-note movement between the two stanzas whereas Mendelssohn apparently wanted it to stop and start again. Or is there evidence that Mendelssohn later cut that bar (I am using the Peters Edition)? In truth the song sounds beautiful either way, but in Herbstlied I really must protest at their taking the major key sections much faster than the minor key ones (no change of tempo is marked in the Peters Edition), and this seems to me to trivialise the effect slightly. Venetianisches Gondellied had me marvelling that a composer who was such a dab hand at Venetian Gondola Songs for piano solo should become so unmagical when writing one for the voice. I then reflected that the most famous of those for the piano, op.30/6, is marked Allegretto tranquillo, which implies a similar tempo to the song's Allegretto non troppo, yet by time-honoured tradition it is played considerably more slowly than Stutzmann and Baldwin's performance of the song. After a bit of experimenting on the piano I am convinced that at a more relaxed tempo (but still within sight of an Allegretto) the song would have the same magic as the piano pieces. Finally, Baldwin's staccato accompaniment to An die Entfernte is delightful, but I can see no sign that Mendelssohn actually wanted this way.

For the rest of the programme they seemed to me to be absolutely perfect and I reached the end feeling that I could have gone on listening to a whole lot more of these songs. The disc comes with a good note and texts and translations into English and French."
- Christopher Howell (MusicWeb on the Lieder)