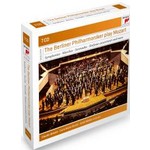 "I warmly recommend the disc not only to those who hanker after the old days but to those who want to hear Mozart performances which marry sweetness and purity to crisp rhythms and dramatic bite."
(Gramophone on the symphonies)

"Claudio Abbado and the Berlin Philharmonic once again defy the inexorable progress of period performance in exhilarating accounts of Mozart using modern instruments. I warmly recommend the disc not only to those who hanker after the old days but to those who want to hear Mozart performances which marry sweetness and purity to crisp rhythms and dramatic bite."
(Gramophone on the symphonies)

With almost thirty recordings to his credit on Sony Classical, Claudio Abbado has established himself among the top tier of today's conductors. Combining musical sensitivity and imaginative programming with an eye for neglected repertoire, Claudio Abbado has proven to be equally at home in the opera pit and on the concert podium, and as comfortable with contemporary music as with works from the Classical and Romantic periods.

Elected by members of the Berlin Philharmonic as Principal Conductor and fifth Artistic Director in 1989, Claudio Abbado had previously served as Music Director at La Scala in Milan (1968-1986) and at the Vienna State Opera (1986-1991). In 1987, he was named General Music Director of the City of Vienna. Adept at making the most of the diverse resources in these different positions, Claudio Abbado has enriched the musical and cultural life of the various cities in which he has worked. In Milan, for example, he founded the Orchestra della Scala, an ensemble dedicated to presenting orchestral repertoire in concert. In Vienna, he established the Wien Modern music festival in 1988 and has continued to serve as its Artistic Director, expanding the perview of the festival to include all aspects of contemporary art in addition to music. Similarly, in Berlin in 1992, Claudio Abbado created, with cellist Natalia Gutman, the Berliner Begegnungen (Berlin Encounters) as a regular feature of the annual Berlin Festival, where experienced, professional musicians join together with young, talented instrumentalists to rehearse and perform both classical and contemporary chamber music.

Indeed, Claudio Abbado's interests in the nuturing and development of young artists and new music has gone beyond the bounds of the cities in which he has served. After founding the European Community Youth Orchestra in 1978, Abbado established (in 1986) the Gustav Mahler Youth Orchestra, and has served as Artistic Advisor to the Chamber Orchestra of Europe as well. He instituted an annual international composers competition in Vienna in 1991, and since becoming Artistic Director of the Salzburg Easter Festival in 1994, he has expanded the offerings of that festival to include prizes not only for composition, but also for the figurative arts and literature.

His enthusiasm for commingling the arts has inspired Abbado's seasonal concert planning, both in Berlin and elsewhere. Presenting not only contemporary music alongside classical and romantic repertoire, Abbado offers each season a cycle of concerts dedicated to a particular theme - for instance, the poetry of Hölderlin, the legend of Faust and the dramas of the ancient Greeks.

Among the numerous awards and honors Claudio Abbado has received are the Standard Opera Award for his Boris Godunov at Covent Garden; the Légion d'honneur from the French Ministry of Culture; the Gran Croce, the highest honor of Italy, and the highest civilian honour of the Federal Republic of Germany, the Bundesverdienstkreuz (1992). The Vienna Philharmonic awarded him their Ring of Honour in 1973 and the Golden Nicolai Medal in 1980. In 1985, he was awarded the Gold Medal by the International Gustav Mahler Society. An honorary member of the Gesellschaft der Musikfreunde in Vienna, Abbado has also received honorary degrees from the universities of Cambridge, Aberdeen and Ferrara. In 1994, he was awarded the international Ernst-von-Siemens music prize, Germany's most prestigious music award.

Abbado's recordings with Sony Classical include opera, classical and romantic repertoire. His releases with the Berlin Philharmonic include a set of Mozart symphonies (SK 66859), another Mozart disc featuring the "Posthorn Serenade" (SK 53277) and two live recordings drawn from his thematic concert programs with the Berlin Philharmonic: one centred around the Prometheus legend (SK 53978), the other featuring music inspired by the poetry of Friedrich Hölderlin (SK 53975). Abbado's 1994 recording of Boris Godunov received a number of awards from throughout the world, including the Critic's Choice Award from Gramophone.