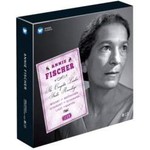 This set of Annie Fischer's complete EMI recordings represent her during a particular decade, when she had made her European reputation. These recordings helped spread that reputation and increased her prominence among pianists.

As studio recordings, they form an unusual part of Fischer's legacy - during most of her time as a performer, she avoided recording studios as she did not believe in playing in a studio without the presence of an audience. She shared this view with her eminent colleague Sviatoslav Richter, who said of her, 'Annie Fischer is a great artist, imbued with a spirit of greatness and genuine profundity.' However, from 1955 to 1966, she made a series of recordings for EMI. It began with Bartók's Third Piano Concerto, the only work she recorded in 1955, and concluded with two of the six Mozart Piano Concertos. They were all made at Abbey Road Studios in London, with the exception of Schumann's Kinderszenen and Kreisleriana, recorded in Vienna.

'I can find no praise too high for Annie Fischer's playing, for she makes every phrase a delight. Sawallisch partners his soloist to perfection. Everybody has here combined to produce something really outstanding among recordings of Mozart concertos.' (Gramophone)