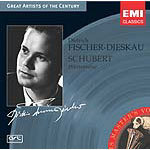 "I have never heard Fishcer-Dieskau sing without being able to learn sonmething from him. With learning comes feeling: intellect and emotion are fused"
- John Steane; Singers of the Century vol.1

Dietrich Fischer-Dieskau was born in Berlin in 1925, studied there at the Hochschule für Musik, and made his stage debut in 1948 at the Staatsoper. Thereafter, he rapidly established his reputation in recital rooms, concert halls and opera houses throughout the world. One of the finest baritones of his era, his repertoire was vast and he recorded most of it. But, of course, central to this repertoire was Lieder, and particularly Brahms, Schubert, Schumann and Wolf. He recorded all the Schubert songs that are appropriate to a male voice. This CD features the later of his two EMI recordings of Winterreise (both with Gerald Moore). Made in 1962 in Berlin, when the voice was in its prime, it is considered to be one of his finest achievements on record.

EMI Classics presents a major new mid-price series called Great Artists of the Century, which celebrates the art and artistry of a roster of the most distinguished musicians of the 20th century and of the first decade of the 21st century. Each release in Great Artists of the Century focuses on one distinguished musician and offers a programme of important EMI recordings to demonstrate the qualities and achievements of the featured artist.