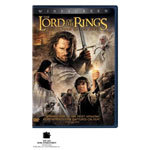 The Fellowship's journey is coming to an end. Sauron's forces have attacked Gondor's capital of Minas Tirith in his final siege against mankind. Watched over by a fading steward, the once great kingdom has never been in more desperate need of its king. But will Aragorn find the strength to become what he was born to be and rise to meet his destiny?

As Gandalf desperately tries to move the broken forces of Gondor to act, Théoden unites the warriors of Rohan to join in the fight. Even in their courage and passionate loyalty, the forces of men - with Éowyn and Merry hidden among them - are no match against the swarming legions of enemies raining down on the kingdom. With each victory comes great sacrifice. Despite their great losses, The Fellowship charges forward in the greatest battle of their lifetime, united in their singular goal to give Frodo a chance to complete his quest. Traveling across treacherous enemy lands, Frodo must rely increasingly on Sam and Gollum as The Ring continues to test his allegiance and, ultimately, his soul.

Disc 2: Special Features
Bonus disc featuring hours of additional content.
3 in-depth programs that reveal the secrets behind the production of this epic adventure,
The Quest Fulfilled: A Director's Vision
A Filmmaker's Journey: Making The Return of the King
National Geographic Special - The Lord of the Rings: The Return of the King
6 featurettes originally created for lordoftherings.net:
Aragorn's Destiny
Minas Tirith: Capital of Gondor
The Battle of Pelennor Fields
Samwise the Brave
Eowyn: White Lady of Rohan
Digital Horse Doubles
Original theatrical trailers and TV spots
The Lord of the Rings Trilogy Supertrailer
The Battle for Middle-earth Continues - Video Games from EA