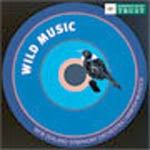 Superb performances of pieces by New Zealand composers Marshall and Douglas Lilburn as well as Tchaikovsky, Dvorák, Elgar, and Saint-Saëns.

"The title Wild Music is an unfortunate choice for the New Zealand Symphony Orchestra's most recent CD.

Those expecting 70 minutes of unbridled sonic savagery will be dismayed, although the project's deep involvement with the Department of Conservation gives away its intentions.

Apart from Falla's Ritual Fire Dance, which crackles with incendiary purpose, Hamish MacCunn's broad-shouldered The Land of the Mountain and the Flood and the most sumptuous account yet recorded of Lilburn's A Song of Islands, this is comparatively gentle fare.

Conductor Hamish McKeich allows the seagulls a more leisurely flight in Christopher Marshall's Hikurangi Sunrise than James Judd gave them when the work won the audience's commendation in the NZSO's Music 2000 Prize.

Although Marshall's palette is given full rein in this recording, the work is at its most effective when it deals out mysterious minimalism.

There are some unusual works here, such as Dvorak's The Wood Dove. The gothic trappings key-in grimly with the booklet's paragraphs on threatened bird species and Michael Parekowhai's cover painting of a tui on target."
(William Dart New Zealand Herald Sept 2004)

Released in conjunction with Concert FM and the Department of Conservation to help promote Conservation Week, the pieces on 'Wild Music' have been specially chosen to help raise the public's awareness of our natural environment.

1. Marshall: Hikurangi Sunrise
2. Tchaikovsky: Puss in Boots and the White Cat (The Sleeping Beauty)
3. Elgar: Elegy for Strings
4. MacCunn: The Land of the Mountain and the Flood
Saint-Saens: Aquarium (Carnival of the Animals)
may1 de Falla: Ritual Fire Dance (El Amor Brujo)
7. Lilburn: A Song of Islands

Live in Concert With the NZSO