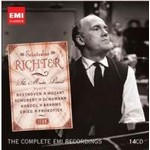 'Idiosyncratic, plain-speaking, heroic, reserved, lyrical, virtuosic and perhaps above all profoundly enigmatic, Sviatoslav Richter remains one of the greatest recreative artists of all time.' (Bryce Morrison)

Sviatoslav Richter was born in 1915 and died in August 1997. He was a Soviet pianist, widely recognised as one of the greatest pianists of the 20th century. He was well known for the depth of his interpretations, virtuoso technique and extensive repertoire. In March 1934, Richter gave his first recital in his home town of Odessa. He did not start formal piano studies until three years later, with Heinrich Neuhaus, a famous pianist and piano teacher at the Moscow Conservatoire. During Richter's audition for Neuhaus, the teacher apparently whispered to a fellow student 'this man's a genius'. Although Neuhaus taught many great pianists, including Emil Gilels and Radu Lupu, it is said that he considered Richter to be 'the genius pupil' for whom he had been waiting all his life. The West first became aware of Richter through recordings he made in the 1950s. One of Richter's first advocates in the West was Emil Gilels, who stated during his first tour of the United States that the critics, who were giving Gilels rave reviews, should 'wait until you hear Richter'. Sviatoslav Richter (who had received the Stalin and Lenin prizes and became People's Artist of the RSFSR), gave his first concert tours in the USA in 1960 and in Britain and France in 1961. While Richter enjoyed performing in front of an audience, he hated planning concerts years in advance, and in later years took to playing at very short notice in small, quite often darkened halls, with only a small lamp lighting the score. Richter claimed that this setting helped the audience focus on the music being performed, rather than on extraneous and irrelevant matters such as the performer's grimaces and gestures. Richter's repertoire ranged from Handel and Bach to Szymanowski, Berg, Webern, Stravinsky, Bartók, Hindemith, Britten, and Gershwin. Central to his repertoire were the works of all the composers who are represented in this Icon set.

Berg:
Chamber Concerto for Piano and Violin with 13 Wind Instruments

Schubert:
Piano Sonata No. 13 in A major, D664
Fantasie in C major, D760 'Wanderer'
Piano Quintet in A major, D667 'The Trout'
(with Borodin Quartet with Georg Hörtnagel)

Icon: Rudolf Kempe: The Genius of the Podium