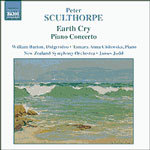 "Tasmanian composer Sculthorpe's psychedelic images of primeval times, nature and infinity are well worth your trouble. A superb and breathtakingly inexpensive disc. Miraculously good value at every level."
- MusicWeb Nov 2004

"It's a well-planned programme, and it's hard to imagine it much better played than by James Judd's increasingly impressive New Zealand Symphony Orchestra, or by the two soloists, both Sculthorpe adepts. A vivid recording enhances the music's striking impact."
***** Five Stars (Pick of the Month) BBC Music Magazine (Feb 05)

"The present recording contains works that, in one way or another, are related to the Pacific region, including Australia. They were written during the last thirty years of my compositional life.

In many ways, Australia is the one of the few places on Earth where one can honestly write quick and joyous music. All the same it would be dishonest of me to write music that is wholly optimistic. The lack of a common cause and the self-interest of many have drained Australian society of much of its energy. A bogus national identity and its commercialisation have obscured the true breadth of our culture. Most of the jubilation, I feel, awaits us in the future. We now need to attune ourselves to the continent, to listen to the cry of the earth as the Aborigines have done for many thousands of years. Earth Cry (1986) is a straightforward and melodious work. Its four parts are made up of a quick ritualistic music framed by slower music of a supplicatory nature, and an extended coda. While the work is very much in my own personal idiom, the treatment of the orchestra represents a new departure. This is particularly noticeable in the way that instruments are doubled. First and second violins, for instance, sing in unison for most of the work, and lower strings often sing with the lower brass. Furthermore, in order to summon up broader feelings and a broader landscape I have added a part for didgeridoo.

It seems that on Easter Island, at the beginning of the seventeenth century, there was a population explosion. The inhabitants stripped the islands of trees, causing soil erosion and depriving themselves of building materials for boats and housing. Retreating to caves, clans fought each other, and finally there was enslavement and cannibalisation. By the time the first Europeans arrived, in 1722, the survivors had even forgotten the significance of the great stone heads that still stand there. Easter Island is a memento mori (literally 'remember to die') for this planet. The concern of this work, therefore, is not with what happened to the inhabitants of Easter Island, but with what could happen to all of us, with what could happen to the human race. Much of the music, then, is dominated by the oscillation of the pitches G and A flat, which the astronomer Kepler, a contemporary of Shakespeare, believed to be the sound of planet earth. I have also used part of the plainchant Dies irae, from the Latin Requiem Mass. Memento Mori (1993) is a straightforward work, in one movement. Following an introduction, two statements of the plainchant lead into music of lamentation, music which is based on the Kepler premise. Two further statements of the plainchant lead to the climax. This is followed by music of regret, which also suggests the possibility of salvation.

During the period that my Piano Concerto (1983) was written, three of my closest friends died. Furthermore I was involved in an almost-fatal accident. The work, however, is more concerned with lifeaffirmation than with death, and if I have written more within the European concert tradition than is my custom, this is because I felt that the genre demanded it. All the same, at one time I considered calling the work 'Pacific'. In one continuous movement, the work is in five sections: Grave - Animato - Grave, Calmo, Animato - Risoluto, Come Notturno, Estatico. The first section is related to the third and fourth sections, and the second, the longest, is related to the last, although motives from the opening do appear in these two sections. Flutes and clarinets are omitted from the orchestra, so that the wind instruments used form a reed choir, consisting of two oboes, two bassoons and a contra-bassoon. It might be added that some of the musical ideas stem from both the ancient court music of Japan and the Balinese gamelan.

From Oceania (1970/2003) is based upon the last part of my orchestral work, Music for Japan. The latter was written for the Australian Youth Orchestra to play at Expo '70 in Osaka. Composed in what is known as my Sun Music style, I thought of it as a present to Japan from Australia. Unlike most of my music, it contains no melodic material and little harmonic movement. Instead the orchestra is treated almost like a giant percussion instrument. In From Oceania, I begin with percussion itself. Other instruments are gradually added, leading to a section marked Feroce, ma ben misurato, and a climax consisting of a tone cluster spanning the entire orchestra. An E major chord is then twice revealed, followed by a coda, most of which is unmeasured.

Kakadu (1988) takes its name from the Kakadu National Park in Northern Australia. An enormous wilderness area, it extends from coastal tidal plains to rugged mountain plateaux, and the culture of the local tribe, the gagadju, dates back for some fifty thousand years. Sadly, today there are only a few remaining speakers of the language. The work, then, is concerned with my feeling about this place, its landscape, its change of seasons, its dry season and its wet, its cycle of life and death. Basically the music is in three parts. The outer parts are dance-like and energetic, with all the melodic material, as in much of my recent music, suggested by the contours and and rhythms of indigenous chant. The somewhat introspective central part, preceded by a dramatic section containing imitations of birdsong, is quite firmly based upon a chant from this particular area. Kakadu was commissioned in 1988 by an American friend, Emanuel Papper, as a gift for his wife, upon her birthday. The cor anglais, which is played in the quiet sections of the work, represents his voice. In the central part, for instance, the long chromatic melody played in counterpoint with the chant is intended as an expression of his love."
- Peter Sculthorpe