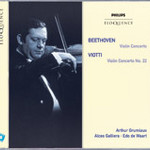 "Among the finest ever committed to disc...imbued with a spirit of classical serenity."
- Penguin Guide to Compact Discs

"De Waart manages to infuse some real metrical tension into the opening orchestral introduction, one that Grumiaux enhances. His trill is of electric velocity, the vibrato perfectly controlled, the gestures classical and pellucid, the phrasing of rapt naturalness. There are no emotive finger position changes that call attention to themselves; everything is directed inward, including the powerful orchestral pianissimo de Waart prepares for Grumiaux throughout the first movement. Refinement and lyricism are the watchwords of the slow movement and the finale, whilst never an adrenalin producer, ratchets enough of its own rhythmic drama to stimulate, educate and enliven. This is playing of elevation and finesse."
(MusicWeb Jan 2006)

Arthur Grumiaux's second recording of the Beethoven concerto (he recorded it previously with Eduard van Beinum and subsequently with Sir Colin Davis) is perhaps the most eloquent of them all. Beautifully recorded too, it is uniquely coupled with a charming work written in the 1790s by Giovanni Battista Viotti. Once the regular province of concert programs of violinists performing in the mid-20th century, it has fallen out of favour and receives a timely revival here.