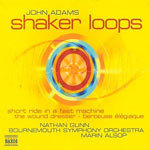 "Here is the perfect introduction to the music of John Adams - that's if you sidestepped the powerful On the Transmigration of Souls two months ago. It shows a number of the composer's different sides from the dynamic Short Ride of 1986 to his Busoni arrangement, the Berceuse élégiaque of 1991."
- Editor's Choice Gramophone Magazine November 2004

"Excellent performances in good recorded sound .... an ideal very inexpensive introduction to one of the most stimulating composers currently before the public. Well-nigh ideal. Urgently recommended"
Recording of the Month MusicWebOct 2004

"Two things particularly excited me about John's music," said conductor Simon Rattle. "One was that it always seemed to be moving forward in space, that I would imagine while listening to it that I was in a light aircraft flying rather fast, close to the ground. The other thing is that, in almost all of his best pieces, there's a mixture of ecstasy and sadness." This quotation, from one of the world's pre-eminent conductors, pretty well sums up the appeal on the work of composer John Adams: its immediacy, its speed (even when slow), and its power, like all great art, to give catharsis through despondency, despair, or even through frantic motion.

The story of John Adams is a truly American one, in the vein of the peripatetic journeyman ranging from Johnny Appleseed to Bob Dylan to the former president who shares his name. Raised in Massachusetts, Adams, in 1971, the tail end of the "love generation", packed his things into a Volkswagen Bug and headed west to San Francisco, the apex of the waning revolution, in order to distance himself from his neo-European upbringing. He was a trained composer, studying at Harvard with eminent mentors like Leon Kirchner, David Del Tredici and Roger Sessions, pursuing not only composition but conducting and playing the clarinet as well. However, in order to shuffle off this petit bourgeois training, and to reconcile himself with the wave of popular music in which he felt himself (perhaps in spite of his Ivy League affiliation) swept up, Adams, rather than deny it, ran toward it, to California.

This split explains Adams' oeuvre very well. Who else but such a polyglot could write both the gloomy, sedate Wound-Dresser, the Rent aspirant opera I Was Looking at the Ceiling and then I Saw the Sky, and the ersatz electronica of Hoodoo Zephyr? When he got to the coast, his career blossomed, and he created pieces for all media: from film scores and operas to symphonies, concertos, string quartets, and think pieces for orchestra, enduring works like Harmonielehre, Harmonium, The Chairman Dances (a suite taken from his opera Nixon in China) and two of the gems found on this disc, Short Ride in a Fast Machine and Shaker Loops.

Short Ride in a Fast Machine