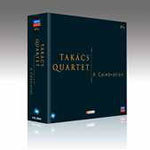 The Takacs Quartet has enjoyed enormous success in Australia since its first tour for Musica Viva in 1985. Its four subsequent tours (in 1988, 1994, 1999 and 2001) have seen capacity Australian audiences hear this fantasic ensemble perform many masterworks of the repertoire.
2004 sees the Takacs tour New Zealand and this specially priced set is released to coincide with the tour.

The quartets tours have always featured works it has recorded to great aclaim, including landmark performances of Haydn, Bartok and Beethoven.

We hope that this CD set gives listeners as much pleasure as the live performances.