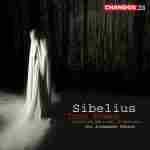 "Alexander Gibson's Sibelius recordings for Chandos represent the high point of his career on disc, and none is finer than this set of tone poems, an excellent value as reissued at a twofer price. Several of the performances here never have been bettered. Luonnotar features the sensational Phyllis Bryn-Julson, whose accuracy of pitch and evenness across registers delivers thrilling results, culminating in a mystical, luminous conclusion quite unlike any other. Here, and also in Oceanides, Gibson paces the music ideally, with perfectly timed climaxes, giving both works the effortless feeling of movement and organic unfolding that remains the hallmark of Sibelius' symphonic writing."
(10 / 10 ClassicsToday)

The arrival of Jean Sibelius on the musical scene was thoroughly unexpected. He came from Finland, a country which was practically unknown, thought of in terms of extreme cold and little culture and as far removed from the comfortable world of the cultured European as any native village in the middle of nineteenth-century Africa. It is difficult to imagine the impact which mainstream European musical life must have had on Sibelius when he first visited Germany and Austria in his early twenties. Nevertheless, his roots were firmly in Finland and his thoughts were always on his native land when he composed music, never more so than in the evocative tone poems on this disc. Inspired by the country's majestic landscapes and mysterious folklore, these works seem to capture the very essence of Finland.

These recordings were highly acclaimed when first released and collectors will be glad to see them back in the catalogue.

The years which Sir Alexander Gibson spent with the Scottish National Orchestra yielded recordings of the highest calibre. Their Sibelius interpretations, both on record and in the concert hall, rank among the finest of that time and were recognised by the Sibelius Society which presented Gibson with its highest honour, the Sibelius Medal.

Two-CD set for the price of one full-price CD.

The Dream Of Gerontius