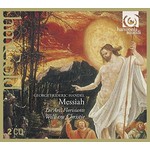 "Admirers of Christie and his French early-music group wouldn't miss this for the world. Best known for rescuing French baroque opera from oblivion, Christie intelligently rethinks this piece with special attention to its harmonic richness." - USA Today

"Choosing a recording of Handel's Messiah from among so many is always going to be difficult...it is Christie's disc with Les Arts Florissants that has stirred my deepest feelings. It is an affecting performance and one which both conveys the humanity and faithfully mirrors the contemplative spirit that suffuses it. Countertenor Andreas Scholl provides a sensitive and self-effacing He was despised." - BBC Music Magazine

"[The Christie] Messiah catalog makes a strong impression for taking a straightforward, honest, uncluttered approach to the greatest most-recorded of all English language choral works...The performances - both from singers and instrumentalists - are direct and clearly articulated. There's an uncommon clarity in the choral lines, apparent from the opening chorus. Conductor William Christie thoroughly understands Messiah not as a series of 'numbers' but as a complete statement, a telling of a story...the only agenda here is to celebrate the joy, the vitality, the tunefulness, and the message of the work itself...The star among the soloists is alto Andreas Scholl. Rarely has a voice as glorious as this been recorded in these arias...the only Messiah you'll need in your library." - CD Review

"The great strength of William Christie's Messiah is his soloists: the two sopranos, Barbara Schlick and Sandrine Piau, are excellent--Schlick warmer and more engaging than usual, Piau downright spectacular in 'Rejoice greatly'; reigning countertenor Andreas Scholl and sturdy bass Nathan Berg do fine work; Mark Padmore is one of the best Handel tenors around. Christie conducts with his usual energy and elegance...Handel collectors should consider it for the solo singing alone." - Amazon.com

"...absolutely compelling, superbly performed and a safe recommendation...For intelligent direction and first-rate executions this Messiah will be hard to beat." - - The Times

"William Christie's Les Arts Florissants, considered one of the better early music consorts, delivers a solid, respectable read of this classic...The soloists perform intelligently and often poignantly...A male, Andreas Scholl, sings the alto voice splendidly. His aria He was despised and rejected of men impressively demonstrates his vocal proficiency. Filling a range of moods from refined and reverential to dramatic and declarative, it's one of the highlights of the CD.' - New York Law Journal

"...an exhilarating account of the score under the American-in-Paris, Christie, who makes you hear the work afresh..." - The Illustrated London News