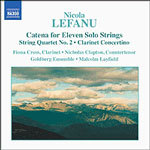 "This music needs and has received an excellent recording. The venue furnishes one of the best acoustics I have heard for contemporary music for some considerable time. It should be used more often."
-- Gary Higginson

"This new Naxos compilation of disciplined performances from the Goldberg Ensemble under their founder director Malcolm Layfield should do much to introduce her music to a wider audience."
-- Andrew Achenbach, Gramophone, April 2005

Recordings of music by Nicola Lefanu have been scarce and this is our loss. Not only that but recently broadcasts of her music have also dried up. Bearing all that in mind it is a surprise and a joy to find this fine disc of four pieces written between 1986 and 1999 issued on a budget price label.

Chandos produced an LP of three works in 1980 (one of their first recordings) which included a magical setting of oriental texts 'The Same Day Dawns' (1974). This was performed by Jane Manning. Smaller works have sometimes emerged like Praeludio II for Orchestra (on ATMA 2 2199 'Women Write Music'). I have listened to these pieces in the course of preparing this review in an attempt to begin to understand Lefanu's language or sound-world.

The delicate textures of 'The Same Day Dawns' and 'Deva' (1979) for cello and seven players, also on the Chandos LP, were the very things that originally attracted me to Lefanu twenty years ago. Unlike her mother, Elizabeth Maconchy, whose voice is quite distinctly her own, Nicola Lefanu does not have such an easily discernible and original voice. However she shares with her mother a love of string instruments and a real penchant in using them. This thought remained strongly with me whilst listening to her one movement, atonal, twelve minute 2nd String Quartet which opens this CD. It's interesting to compare it with Maconchy 2nd of fifty years earlier but I leave that to you. This work has several arresting ideas and a clear form based upon that of the Sonnet but overall it is an elusive work - difficult to grasp.

The 'Concertino for Clarinet and String Orchestra' is quite different. It is a reworking of a chamber work, 'Invisible Places' for Clarinet and String Quartet. The composer says in the accompanying booklet: "I enjoyed the chance to re-interpret the string quartet music for the larger sonority of a string orchestra which in turn releases the clarinet to create a more wide-ranging persona".

I couldn't help but think of her remark, in the notes for the Chandos LP, concerning 'Deva'. There she writes "perhaps I turn to the metaphor of describing the landscape through which the cello passes as like steam ... becoming a river". As Michael Hall wrote in a Musical Times article on Lefanu in 1979 "…the journey is not only physical; it is spiritual too, it concerns the relationship between the individual and relationship of the whole". These comments about being set on a journey when listening to these works quite easily apply to this 'illusive clarinet work' and it pays dividends to listen wholly and completely.

The Spanish poet Garcia Lorca haunted Lefanu for some years. Her opera 'Blood Wedding' is based on his writings and this work is an 'off-shoot' of it. I first heard it circa 1994 on a BBC broadcast at the same time that Lefanu was appointed to her present position as Head of Faculty at York University. She was interviewed before the performance and explained that she wanted to "write a tribute to Lorca". She also said that the poem set here is the only "straight poem found in the play 'Blood Wedding' and it this point the story becomes, for the only time, a Romance". Lefanu also commented on Nicholas Clapton, the wonderful counter-tenor that premièred the work and who records it here. On hearing him sing in the opera she said that she "had to write a piece especially for him". Some of these points she reiterates in her brief booklet notes for the Naxos disc. 'Cancion' plays for twelve intense minutes and in its lyrical passion and dense dissonance stands apart from the other works.

The longest and last work on the CD is 'Catena' for eleven solo strings in which the word 'Catena' is interpreted as a "chain of hills" inspired by a view the composer has from her studio. It has in common with 'Cancion' and with the Quartet the use of microtonal intervals. In my view she uses these better than any other composer I know. They seem logical, musically placed and emotionally at the right points in the melodic lines and phrases. They do not 'offend and baffle the ear' as with some composers (for example John Foulds) but seem to flow naturally in and out of the music; not that 'Cantena' is littered with them but they are significant in this crepuscular atmosphere.

Another modern technique Lefanu resorts to controlled improvisation. In earlier works like 'The Little Valleys' for female voices (1975) the whole work is notated with actual pitches but the performers sing them at their own speed. In her 1979 orchestral work 'Farne', written for the Cambridgeshire Youth Orchestra, there is a central passage using this technique. Here 'Catena' uses it but also in a limited and discrete manner which simply communicates the emotional range of the passage and is musically logical. It is a delicate work, complete with its aleatoric passages and sums up completely Nicola Lefanu's highly original sound-world.

This music needs and has received an excellent recording. The venue furnishes one of the best acoustics I have heard for contemporary music for some considerable time. It should be used more often.
- Gary Higginson