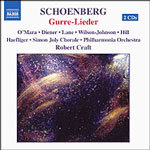 "This is not only recommended but a bit of a bargain as well."
-- Bruce Hodges, MusicWeb

"The Philharmonia Orchestra fairly roars through the score, in the best sense, combining passion with an enormous dynamic range. Craft seems to encourage them to ever-greater heights. The Simon Joly Chorale is sparingly used, with the tenors and basses having few minutes to themselves as Waldemar's men in "Gekusst, O König" before the entire ensemble fairly explodes in the final "Sehte die Sonne" ("Hymn to the Sun"). This dazzling sequence gave me a bit of the shivers, in a good way. All of this is expertly captured by engineer Arne Akselberg in Watford Colosseum, with corresponding clarity and majesty and a huge sense of occasion. The physical sound of the recording is sumptuous, with as mentioned before, a very wide dynamic range. I doubt any listeners will have any complaints. Listen to it loud, but be prepared for the climaxes that may shake the walls of your home....this is not only recommended but a bit of a bargain as well."
-- Bruce Hodges, MusicWeb, 28 December2004

Although he began to compose in his seventh year, Schoenberg produced little of real significance until 1897, when a String Quartet in D was successfully premièred under the auspices of the Wiener Tonkünstlerverein, and won praise from the redoubtable critic Edward Hanslick and the ailing Brahms. Two years on, however, the Tonkünstlerverein rejected Schoenberg's string sextet Verklärte Nacht on account of its advanced harmonic idiom. It was at this time that the organization announced a competition for a new song-cycle, Schoenberg taking up the challenge by setting poems from the 1869 verse-cycle Gurresange by the Danish botanist and writer Jens Peter Jacobsen (1847-1885).

Jacobsen translated Darwin into Danish. His writing is pervaded by social alienation and religious scepticism: qualities which likely commended themselves to the young Schoenberg - largely selftaught out of financial necessity - and whose conversion from Judaism to Lutheranism in 1898 was less out of concern for social advancement than from a need to mark out his own 'world view'. Such was confirmed by his decision to turn the song-cycle into a setting of Jacobsen's ballad for speaker, five solo singers, three four-part male choruses and eight-part mixed chorus, and an orchestra requiring two dozen each of woodwind and brass, a large percussion section and strings to match. By mid-1900, he had completed the short scores of Parts 1 and 2 and, despite pressure of 'hack work' - score copying and operetta orchestration - that of Part 3 emerged the following year. Yet for all the encouragement of such figures as Richard Strauss, the task of orchestration proved incompatible with earning a living, Schoenberg breaking off work on the project barely a year later.

Not that Gurre-Lieder itself was forgotten. In 1907, Alban Berg transcribed the score for piano and, in 1909, Anton Webern (Schoenberg's other most significant pupil of the period) transcribed both the prelude and interludes from Part 1 for eight hands at two pianos, this latter publicly performed in Vienna on 14th January 1910. Although Webern's musical language had advanced considerably in the interim (the monodrama Erwartung had just been completed and the 'song'- cycle Pierrot Lunaire was soon to follow), Schoenberg was inspired to resume work on the cantata, completing the orchestration on 8th November 1911. In Vienna on 23rd February 1913, Gurre-Lieder was first performed under the baton of Franz Schreker, a performance destined to remain one of Schoenberg's greatest public triumphs.

The Gurresänge, a poem of passion, loss, and despair, Jacobsen's most moving work, was written when he was 21, before any of his prose, and also published only after his death. It is based on the great legend of medieval Denmark, the love of King Valdemar the Great (1131-1182) for his mistress Tove, or, as the Valdemar in Jacobsen's poem (Valdemar the Fourth, c. 1320-1375), calls her, Tovelille, little Tove. During Valdemar's absence, his jealous queen, Helvig, induces her lover Folkvard to kill Tove by locking her in her bathhouse and scalding her with steam. Valdemar, in his grief, incurs his own eternal damnation by placing the blame on God:
Lord, do you not blush with shame?
Killing a beggar's only lamb …

The castle at Gurre, on the lake at Gurresco, not far from Elsinore, was excavated in the nineteenth century (from 1835) and is now restored. It is first mentioned in court chronicles in 1364, when Pope Urban V sent a gift of relics to its chapel, and it is recorded that Valdemar the Fourth-the Valdemars ruled from the twelfth to the fourteenth centuries-died there in October 1375. In the Tove and Valdemar ballads (Folkeviser), first written down in the fifteenth century, upon which Jacobsen based his poem, Valdemar the Great-Jacobsen transposed people (Tove) and events (the manner of Tove's death) to the later King-discovers Tove living in a small castle on a Baltic island and falls in love with her. In the original, Helvig, holding a torch, which in Jacobsen's version corresponds to the "vengeance aflame in her heart," follows Folkvard as he locks the door of Tove's bath. Valdemar's vengeance on him is as grisly as Tove's scalding death: he is stuffed into a barrel bristling with nails and rolled about, which was the actual fate of a Danish criminal called Folkvard Lavmandsson. But Jacobsen eliminates the violence in both cases.

Jacobsen's identification of Tove with a forest wood dove-Taube-exploits the alliterative relationship in their names; in Old Norse, Tove is Tofa and "gurre" the onomatopoeic word for the sound emitted by the dove. As the symbol of purity, fidelity, and happiness, the dove is contrasted with other birds- "Helvig's falcon it was that has slain Gurre's dove," and "howling hawks cry from the spire of the church over Tove's grave"-which are associated as well with times of night and day, the raven, the owl, the chanticleer. Like Pelléas, the Gurresänge begins at twilight in a forest at the edge of the sea. It ends, following a night of love and horror, at sunrise.

After Tove's murder, Valdemar searches for her beyond her death and even beyond his own:

My Tove is here, and Tove is there.
Tove is far and Tove is near.
Tove bound by magic to the lake and the wood.
Tove, Tove, Valdemar yearns for you.
And he rediscovers her in Nature:
With Tove's voice whispers the wood,
Through Tove's eyes shines the lake…

The most memorable music in Schoenberg's mammoth cantata was inspired by the "Song of the Wood Dove" and the "Voice of the Poet" in The Summerwind's Wild Hunt ("Sir Ganderfoot and Mother Goose"). The wind is compared to a horseman ("In the corn stalks hear the wind go by like a rider"), and some of the verse is Tennysonian: "White horses all over the lake are prancing / And through the meadow crickets are dancing." Perhaps the heroic attitudes, the medieval atmosphere, and the fin-de-siècle symbolism (though Gurresange was written in 1869) are greater in concept than in poetic realization, but one would have to know Danish to say. Jacobsen's champions regard it as the pinnacle of Danish poetry.

A Survivor from Warsaw / Concerto for Violin and Orchestra / etc