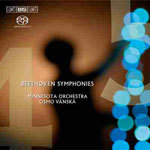 "Fiery, elegant, bristling with character - this is impressive Beethoven. Just when Beethoven symphony cycles seemed to be a thing of the past, here's the start of another one, and - something of rarity - a studio recording from an American orchestra. From the first notes, those qualities that attracted so much attention when Osmo Vänskä was in charge of the BBC Scottish SO are immediately evident: there's tremendous dynamism and energy here"
(Gramophone Magazine)

"Recorded April and May 2004, this high-definition CD has a decided plus for the audiophile in its lifelike sonic spread, where with high-end equipment, you can enjoy the woodwinds emergent sound from behind you. The B-flat Major Symphony is fairly linear and literalist, until the last movement, when Vanska finally pulls out the stops for some unbuttoned Beethoven energies. The sforzati between strings and the tympani's undercurrents are deftly captured. The slightly reduced orchestral forces maintain the Haydnesque parameters of Beethoven's historical sound."
(Audiophile Audition March 2005)

Disc of the Month in the April issue of Classic FM Magazine.

The Minnesota Orchestra has an illustrious past, numbering such legendary figures as Eugene Ormandy, Dimitri Mitropoulos and Antal Dorati among its music directors. As of 2003, Osmo Vänskä is the tenth man on the post, and has had a very successful first season, rounded off by a European tour. During this eventful year, the team also recorded the first volume in what will be one of the first complete cycles of Beethoven's symphonies in Surround Sound. We are now releasing this recording on a disc which is sure to make its mark! Osmo Vänskä - described as 'an exemplary Beethoven conductor, it's hard to think of anyone better at present' (Andrew Clements in The Guardian) - has chosen to open his Beethoven cycle with Symphonies No.4 and No.5. The Fourth was on the programme during the orchestra's European tour this spring in performances that were very warmly applauded by the critics: the Vänskä/Minnesota interpretation 'bristled with energy and displayed a muscular, finely honed ensemble' and 'proved that the possibilities of the modern-instrument approach are not exhausted yet' according to the British music press, and a German reviewer was struck by the symphony's Finale ('one could not imagine it played more vivaciously and grippingly') as well as 'the immensely rich' dynamic contrasts of the performance as a whole - qualities that certainly are brought out in the Surround Sound version on the present disc. (As all our Surround Sound releases, this too is issued on a so-called hybrid disc playable on all CD-players in stereo.) In first-class acoustics (Orchestra Hall, Minneapolis) and using the latest recording technology, BIS's most experienced recording team have given free sonic rein to Osmo Vänskä and his Minnesota Orchestra in performances that are among the most exciting one can imagine!