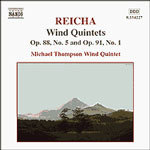 "Great music you might not have heard, but will listen to often"
- MusicWeb Feb 2005

The death of his father in 1771 left the ten-month old Antonín Rejcha in the care of a mother who was unable to look after him properly. He ran away to his paternal grandfather when he was eleven and then accepted the offer of a home and education with his uncle Josef, a highly respected cellist and the Konzertmeister at the celebrated court of Oettingen-Wallerstein. Rejcha later recalled that the worst moment of this second lonely journey came when he had to feign eye trouble in order to persuade a border guard to let him pass without any proper documentation.

During the next three years Antonín learned to play the flute, violin and piano, and in 1785 joined the Elector's orchestra in Bonn as a violinist and flautist. There could hardly have been a better opportunity, for the Elector already employed the young Beethoven as an organist and viola player and the two young musicians immediately established a firm friendship. Both also had composition lessons with Christian Neefe and in 1792 were offered the chance to study with Haydn in Vienna. Beethoven accepted, but Rejcha remained in Bonn until 1794, when the city was occupied by Napoleon's troops and the Elector fled. Josef was too ill to travel but, fearing that his nephew would be attracted by the revolutionary ideas of the French army, sent him to the relative safety of Hamburg. There Rejcha concentrated on composition, teaching and philosophy, but found that the damp climate affected his health. He therefore moved to Paris in 1799 but soon decided that the political situation there was too uncertain and after two years rejoined Beethoven in the relative security of Vienna.

An ardent champion of change, Rejcha developed his own philosophy of music and aesthetics, arguing that "old" forms such as fugue could have a place in modern music only if composers also challenged accepted norms such as the need for bar-lines or for works to start and end in the same key. He then demonstrated some of these ideas in the Praktische Beispiel, a set of 36 bizarre fugues for piano which include unusual rhythms, time signatures and harmonies and which he published in 1803. Before he could take his ideas further, however, Napoleon's troops arrived in Vienna and Rejcha returned to Paris. There he continued to publish theoretical treatises on aesthetics, but had to find another source of income and, after changing his name to Antoine Reicha, began to earn a reputation as an effective and entertaining teacher. His pupils included Berlioz, Liszt, Franck and Gounod, and his reputation as a member of the French musical establishment was confirmed in 1818 by his appointment to teach composition at the Paris Conservatoire.

Today Reicha is best known for his 25 quintets for flute, oboe, clarinet, horn and bassoon. This combination of instruments had been used occasionally before and Reicha first tried it in 1811 but then studied each of the instruments in detail before composing a pair of 'incomparably superior works' as the first two pieces in his Op. 88. The remaining four quintets in the set were written in 1817, and all six were published and performed at the Théâtre Favart in Paris later that year. The Parisian public welcomed them as great novelties and in 1818 were rewarded with a second set of six quintets, Op. 91. Two further sets of six followed, Op. 99 in 1819 and Op. 100 in 1820, and the Paris correspondent of the Allgemeine Musikalische Zeitung commented that, 'if it is possible to surpass Haydn in quartets and quartet composition, this has been achieved by Reicha in these quintets'.