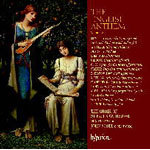 'The performances are excellent, as are William McVicker's booklet-notes, and the great echo's presence is felt as friend, not foe' (Gramophone)

'If this is Scott's swan song with the St Paul's Choir, it is a brilliant one. The choral tone and discipline are outstanding … The Hyperion engineers demonstrate that they know how to record a choir in a highly reverberant setting. The tone is always clear but sumptuous, giving the listener a feel for the immense space involved yet never obscuring the musical textures. The audible reverberation at the pauses in Parry's Lord, let me know mine end is nothing short of breathtaking' (American Record Guide)

'The performances are excellent, as are William McVicker's booklet-notes, and the great echo's presence is felt as friend, not foe' (Gramophone)

'Each piece in this collection - those considered first-rate, those considered perhaps less than first-rate, and those perhaps scarcely considered at all - is given added quality through the pedigree of the performers and the performances; thus many find a stature which would surprise the cynic. If this CD enables some standard works to receive reference performances, and some lesser works to receive a fresh popularity, then it will have done more than most such collections. Warmly recommended' (Organist's Review)

This disc presents anthems by Wesley, Bairstow, Stanford, Stainer, Goss and Parry alongside the sixteenth-century masterpiece Libera nos by John Sheppard and new works by John Rutter, John Scott and Dobrinka Tabakova, whose prize-winning work Praise was premiered at St Paul's as part of the Queen's Golden Jubilee celebrations.

John Scott's last recording with St Paul's - he took up his appointment as Organist and Director of Music at St Thomas Church, Fifth Avenue, New York, in the autumn of 2004 - brings us the eighth (but not final …) volume in the choir's critically acclaimed English Anthems series.

Throughout the project, the 'bread-and-butter' Victoriana of the rich Anglican repertory has been complemented by inspirational discoveries and commissions. This new disc presents anthems by Wesley, Bairstow, Stanford, Stainer, Goss and Parry alongside the sixteenth-century masterpiece Libera nos by John Sheppard (once thought to have been sacked by Magdalen College Oxford for stealing rival choirs' choristers and hauling them back to the city in chains - the story turns out to concern a similarly named colleague) and new works by John Rutter, the Cathedral's former organist Christopher Dearnley and John Scott himself.

Also included is the startlingly original - immediately appealing - and prize-winning Praise by Dobrinka Tabakova, a work premiered at St Paul's as part of the Queen's Golden Jubilee celebrations.

SAMUEL SEBASTIAN WESLEY Praise the Lord, my soul
VANN Behold, how good and joyful a thing it is
WHITLOCK Glorious in heaven
DEARNLEY Jubilate
SHEPPARD Libera nos
GIBBONS Great Lord of Lords
GOSS O pray for the peace of Jerusalem
STAINER They that wait upon the Lord
BAIRSTOW Lord, I call upon thee
MCKIE We wait for thy loving kindness O God
STANFORD Ye choirs of new Jerusalem
PARRY Lord, let me know mine end
MIDDLETON Let my prayer be set forth
TABAKOVA Praise
JOHN SCOTT Behold, O God our defender
RUTTER A crown of glory