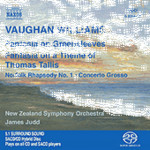 Hybrid SACD in 5.1 Surround Sound.
Playable on all CD players

"There have certainly been many wonderful recordings of the popular short orchestral pieces of Ralph Vaughan Williams...For someone coming to these pieces for the first time, though, this issue deserves real consideration...played here by one of the top orchestras Down Under, the New Zealand Symphony Orchestra led by British conductor James Judd, whose recordings with this orchestra and the Florida Philharmonic have made his name familiar to discerning record collectors...This issue deserves real praise. Even though this is a budget CD the performances are comparable to the top echelon of full-price releases, and are better than many of them. You can't go wrong here. The playing is nuanced, the sound is crystal clear. The wide dynamic range makes it possible to hear the utterly soft playing called for in, say, the Tallis Fantasia as well as the full climaxes in that and the other pieces. Recommended."
- Scott Morrison, Amazon.com, August 2003

"From Gershwin, Copland, and Bernstein, James Judd steers his New Zealand Symphony across the Atlantic towards two of their less glitzy contemporary's most popular bon-bons. Vaughan William's less well-known but atmospheric Norfolk Rhapsody No. 1, plus his tone poem In The Fen Country and five-movement Concerto Grosso are thrown in as much more than makeweight material alongside the almost too familiar Greensleeves and the shimmering Tallis Fantasia. The peripatetic James Judd, recently at the Barbican, seems to be making good down under, these are bargain-price performances to rival any on the market."
- Anthony Holden, The Observer, 6/22/03

"Helped by vivid sound, James Judd conducts the New Zealand Symphony Orchestra in glowing performances of these favourite [sic] Vaughan Williams works. There have been a number of discs from this orchestra in recent years, but here Judd shows what quality of player the orchestra now attracts, especially in its ripely resonant string tone. The whole is nicely balanced in a warm but clear acoustic. There is good solo work, too, from the leading string players as well as the woodwind and brass soloists."
- Edward Greenfield, Gramophone, August 2003

Fantasia on a Theme of Thomas Tallis

In the Fen Country

The Voice Inside / Alas! How Swift / Cassandra's Songs / Kaea