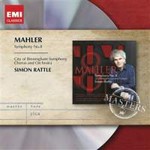 MUSICWEB RECORDINGS OF THE YEAR (2005)

"This current recording is a superb rendition of a great masterpiece well captured by the engineers. Rattle is handsomely served by his soloists, choirs and orchestra and his interpretation is among the best around; he has an innate sense of the sweep of the piece which he carries to the very last bars." (MusicWeb Feb 2009)

"Sir Simon Rattle's Mahler journey on record started back in 1985 with Das klagende Lied, that early, strange creation that seems to hold so many of the seeds of the composer's later work. Now, 20 years later, he completes the journey by returning to Birmingham for the Eighth Symphony, the so-called Symphony of a Thousand. There was a sense of occasion - difficult to avoid given the sheer number of performers required - that transfers magnificently to disc. Like many conductors, Rattle has steered clear of this work until the right moment. Well, the moment arrived and the results are glorious: here is Rattle at the helm of an orchestra whose profile and reputation he raised to extraordinary heights. If, like all those Mahler maestros, you've been waiting for the right moment to grapple with this epic work, Sir Simon Rattle might well be the right man to convert you."
(Gramophone)

'Imagine that the Universe bursts into song. We hear no longer human voices, but those of planets and suns which revolve.' This was Gustav Mahler on his Symphony No.8 - the celebrated 'Symphony of a Thousand'.

Written in a staggering burst of creative inspiration over eight weeks in 1906, the Eighth Symphony is considered by many to be Mahler's greatest triumph. In June 2004, Simon Rattle assembled in Symphony Hall, Birmingham, massive orchestral and vocal forces and the stunning performance of the work that resulted was recorded live by EMI Classics.

• Simon Rattle completes a monumental 25-year recording journey with the release of Mahler's Symphony No. 8.
Recorded with the City of Birmingham Symphony Orchestra in June 2004, it symbolises a return to the orchestra that first brought Rattle worldwide acclaim.

• Rattle sums up his first impression of the work, which he heard at the age of eleven: "One of my memories is
sitting in the front row of the Liverpool Cathedral and being stunned at the sound and shape of the piece. I don't
have individual memories apart from this great wash of joy."