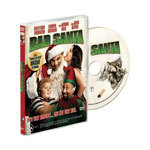 The traditional Christmas tale will never be the same after this cleverly twisted, merrily irreverent story of a Santa so bad he's funny. Billy Bob Thornton stars (in a Golden Globe-nominated role) as Willie T. Stokes, a washed-up, wisecracking department store Santa who is only in the business for the criminal opportunities: Every Christmas Eve this Santa and his ingenious Elf - Willie's midget partner-in-crime Marcus (Tony Cox) - crack the store safe and make off with their own holiday stash. But this year Santa and his Elf find their annual heist endangered by a pesky store manager (John Ritter), a savvy mall detective (Bernie Mac), a sexy Santa fan (Lauren Graham) and an 8-year-old misfit (Britt Kelly) who decides to believe that Willie - intoxicated, acid-tongued and felonious as he is - is the real Santa.

Includes :-
-Never before seen deleted scenes
-Outtakes
-Behind the scenes featurette on the making of the movie with cast and crew interviews