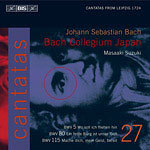 "If you've yet to sample the series, or are just collecting the highlights, this is definitely one to consider...this disc deserves to be the best selling of the cycle."
(International Record Review June 2005)

"Collectors of the series will not be disappointed. Apart from anything, you would be pushed in a Bach cantata disc to find nearly 70 minutes of music of such unadulterated quality."
(Gramophone)

Ein feste Burg ist unser Gott (BWV 80), one of the best-loved of all Bach Cantatas, opens volume 27 of Masaaki Suzuki's and Bach Collegium Japan's journey through the world of J. S. Bach. Even though the year of its composition is uncertain, it has been included on this disc, since its structure makes it part of the Chorale Cantata Year, the great church music project that Bach began in 1724. Each cantata belonging to the project was based on the text of one specific chorale, using it (or versions of it) not only for the choral movements but also for recitatives and arias. Intending BWV 80 for Reformation Day (celebrated each year on 31st October), Bach's choice of chorale was obvious: the most famous hymn by Martin Luther, the father of the Reformation. Less dramatic and forceful, the accompanying two cantatas Wo soll ich fliehen hin BWV5) and Mache dich, mein Geist, bereit (BWV115) are equally full of arresting instances of Bach's great genius, and as always the informative liner notes by Klaus Hofmann serve as a useful guide through the works. The work of Bach Collegium Japan and Masaaki Suzuki is by now self-recommending, but this disc also gives the opportunity to hear two new (for this series) soloists, Susanne Rydén (soprano) and Pascal Bertin (counter-tenor), who both are making their débuts on BIS.