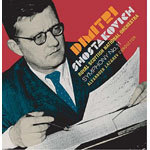 "This well mastered disc assumes a worthy position in the RSNO/Shostakovich at tradition, confirming the orchestra's standards and international credentials"
(MusicWeb Juen 2005)

"Lazarev has earned his place in RSNO history, with performances that tore deep into the harshness and the harrowing irony of some of the 20th century's most enigmatic music. If only this great series had been recorded for posterity." (The Scotsman, 2001)

"This well mastered disc assumes a worthy position in the RSNO/Shostakovich at tradition, confirming the orchestra's standards and international credentials"
(MusicWeb Juen 2005)

The driving force behind this major new recording is the RSNO's principal conductor, Alexander Lazarev. Having been born and educated in Russia, and witness to some of the
concerts given by the composer himself, Lazarev is in a unique position to present these symphonies with empathy and authenticity.

Alexander Lazarev clearly knows his Shostakovich and is absolutely dedicated to the cause of laying out a definitive chronicle of the composer's symphonic development. While giving full vent to the lighter whirlwind movements, the conductor aims to bring a serious and empassioned expression to the complex and sometimes contradictory messages that the composer displays (or perhaps hides) in these works.

This is indeed a symphonist from the midst of the 20th century, displaying all the complexities and contradictions of life, and allowing his art to be approached in a number of different ways. The interpretation is very much in the ear of the listener.

The RSNO has recorded Shostakovich symphonies 1, 4,5,6,7,8,9,10 - these recordings
are all Penguin guide recommended).